Kestrels: They Get By With A Little Help From Friends 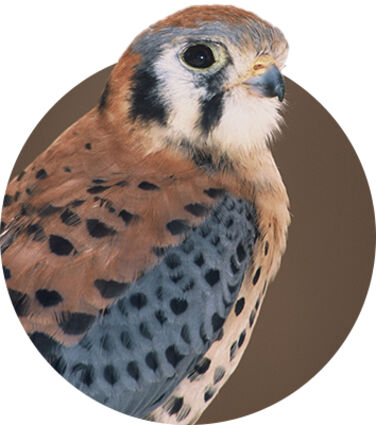 The American kestrel, formerly known as the sparrow hawk, is North America's smallest and most colorful falcon. During the breeding season, kestrels need access to nesting cavities and perches found in trees and saguaros. American kestrels lack the ability to excavate their own nest cavities, so they rely on structures already built by other animals, such as woodpeckers.

Although a relatively abundant species, population declines have been detected throughout much of the species range, including Arizona.To bring awareness to the state's American kestrel population declines and encourage the placement, monitoring and reporting of nest box occupancy, the Arizona Game and Fish Department, as part of the National American Kestrel Partnership, started the American Kestrel Nestwatch Project in Arizona.

This volunteer-based project aims to provide cavity nesting opportunities for breeding American kestrels, to monitor productivity rates of the species in Arizona, and establish an infrastructure where Arizona can participate in larger range-wide studies of American kestrels.

Through the project, artificial nest boxes are built with simple raw materials and placed all across Arizona on Federal, State, Tribal and private lands. Involved entities span from federal, state, tribal, non-profit and private landowners that have placed and monitored boxes.