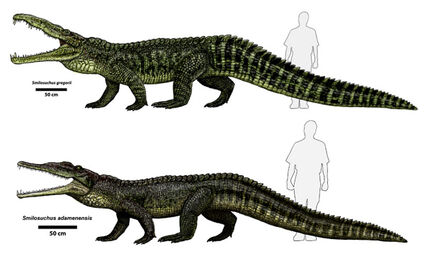 After years of study and preparation the skull of Gumby the Phytosaur will be on display in the Rainbow Forest Museum at Petrified Forest National Park. Gumby is a specimen of phytosaur called Smilosuchus adamanensis (the name means 'chisel crocodile' of Adamana). Phytosaurs are a group of extinct crocodile-like reptiles that lived in Arizona during the Late Triassic. Fossils of at least 9 different types of Phytosaurs have been found within the park and they were likely a dominant predator hundreds of millions of years ago.

This phytosaur skull was excavated from the park in June of 2008 and it was informally named Gumby when, thanks to an unexpected rainstorm during excavation, the fossil became re -buried in water and mud which made the bones somewhat flexible and bendy. Most fossils are extremely fragile and because of its unexpected dunking, Gumby's skull has a history of falling apart from time to time.

During a recent collapse while undergoing preparation (the process of cleaning rock from the bones) the park paleontologists took advantage of increased access to the depths of the skull to create a high-quality mold from which research and display casts (replicas) can be made. "We have already created one display cast and are currently planning to incorporate it into our Rainbow Forest Museum dig pit in the blue mesa room later this year" says museum curator Matt Smith.

In the meantime, the original skull has been repaired and a mount is being created for eventual display in the "Rivers to Stone" display case. The case is a recreation, using primarily original fossil material, of a small section of a mural representing animals including phytosaurs, metoposaurs, crawfish, and small fish found in a Triassic river. "The updated display will depend on whether Gumby continues to behave like a solid and less like a liquid" says Matt. "If Gumby goes to pieces again museum staff will be able to display a cast in the exhibit case and store the original specimen in the collections to protect it.

"Sometimes, we get lucky, and we can display our delicate fossils. Sometimes, despite our best efforts, they remain stubbornly behind the scenes". Gumby the fossil or the fossil cast will be available for viewing sometime in 2022.