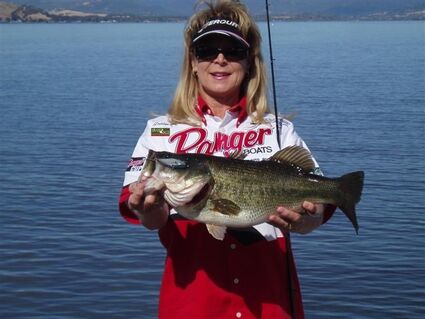 Small And Large: Blanchard And Baldwin Offer Tips For Catching

"Early in February it can seem like the fish are on strike," says local resident and ournament angler Debbie Blanchard, "but before long the big smallmouth start to move in and you can catch a lot of really big fish." The smallmouth begin to spawn when the

water reaches about 58 degrees, and they spawn deeper than largemouth do.

Debbie looks for beds in at least ten feet of water. They're easy to spot, she says, because smallmouth nests are as much as three times as big as largemouth beds, and they excavate clear to the rock, making the big pale beds very easy to spot in the clear water of Havasu.

Debbie starts in the main lake this time of year. Her first stop will be the Pilot Rock or Steamboat area, then she'll fish south toward the Bill Williams River. "The river areaactually warms up first," says Debbie, "because the water there isn't as clear." She fishesthe primary points with a Carolina rig or a split shot rig. Fish stage on these points in fifteen to twenty-five feet of water until they decide to spawn.

At Havasu, a Carolina rig needs to be more like a slightly beefy split shot rig to be successful. Debbie uses 6- to 8-pound-test fluorocarbon line and a 1/4-ounce weight on her Carolina rigs. The fish at Havasu are very line-sensitive and the water is extremely clear, so if you try braid or even heavy mono you may end up skunked. Best baits for Carolina and split-shot rigs include Senkos in green and white laminate, purple with blue flake, and root beer with red and gold flakes.

Power Worms are a staple at Havasu as well. The Bass there just love purple Power Worms. For split-shotting, it's hard to beat 4-inch curly-tail or straight-tail Robo Worms in Bold Bluegill or Warmouth colors. When it is clear and calm, go with the finesse baits and fish very, very slowly. Debbie uses about a ten-inch leader on split-shot rigs, three feet on Carolina rigs. The slower the bite, the longer the leader. She paints her sinkers brown to blend with the bottom and prevent the sinkers getting bit instead of the baits.

Once the fish go into active pre-spawn mode, Debbie starts using reaction baits like crankbaits and jerkbaits. These are also go-to baits on windy days when fishing a split shot or Carolina rig becomes impossible. The Bass at Havasu love chartreuse/shad colored baits. Pointer 78's, cranks, and Rat-L-Traps in Ghost Minnow, chartreuse Shad. Pearl Ayu, and American Shad are among her favorite hard baits. "Any crawdad baits you choose this time of year should be red," says Debbie. "The Bass are on rocky points and they are really keyed in on crawdads, which are bright red and orange in early spring.

While the smallmouth Bass seem to love the deeper waters of the main lake, the big Largemouth Bass head for the backwaters and spawn on the shallow sandy banks. If you are simply racing down the main lake, it's easy to miss the entrances to these backwaters. If the water is a bit low, you may have to pole your way through the tules to get to them.Slow down and cruise the edges of the tules slowly while you watch for small channels that lead to open areas hidden behind the reeds.

Mike Baldwin of Mohave Valley loves to throw spinnerbaits along the tule line and in the backwaters. There's just one problem: there are literally miles and miles of tules at Havasu. How do you decide where to fish? Easy. "Look for dark water," says Mike.Dark water is deep water, and the Bass love to use the little holes near the tules.Mike starts in coves near the north end of the lake, fishing a Pointer 78, but slowly. The water is usually warmer in these shallow areas, and there are man-made brush piles thathold fish. From the Arizona Channel to Blankenship is the first area where the largemouth will spawn, says Mike. There is a series of coves going up this area. He stops to fish the rocky points along the way. 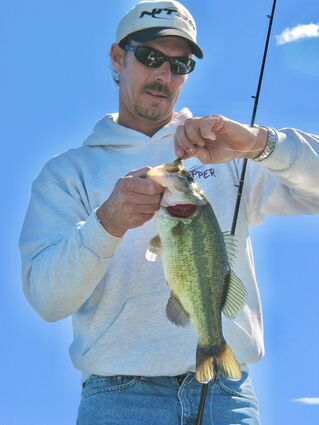 Baldwin travels with the trolling motor because if you ram into a sand bar on the trolling motor you don't get stuck as badly as you would with the big motor. He keeps a variety of baits tied on and switches with the cover. The deck of his boat holds crankbaits, spinnerbaits, split-shot rigs, and jigs. He likes Mojo style weights for his split shot fishing because they go through the cover more easily. Mike ties a swivel about a foot or so above the hook, then adds the weight another eighteen inches above that. He'll pitch this rig underhand close to the tules or beneath any overhanging vegetation and let it fall, shaking it four or five times, then lets it fall and shake again without re-casting. Always shake it twice per spot - it's a reaction bite.

This is also a good bed fish rig. Stay back when you fish this rig -- if the fish come out and see the boat, they'll turn right back around and won't come out again. The good water is around four feet deep.

Havasu: A Great Place For A Winter Vacation

Havasu has plenty of places to launch, great camping areas, plus very nice hotels at Lake Havasu City. It's a great place to take the family for a winter vacation.