The Arizona firefighting museum is the largest in the world..

The National Historical Fire Foundation (better known as the Hall of Flame Museum Of Firefighting) is a museum dedicated to the historical preservation of firefighting equipment used through the years around the world.

The museum's artifacts were originally the private collection of George F. Getz Jr., who opened the original Hall of Flame in Wisconsin in 1961. The collection relocated to Phoenix in 1974, and has since grown into the world's largest historical firefighting museum.

It also has a large collection of fire department arm patches, early fire insurance marks, fire helmets, art objects and other types of graphics, as well as a children's play area.

A number of the collection's vehicles are taken out of the Museum by volunteer operators to participate in Phoenix-area parades and other events. 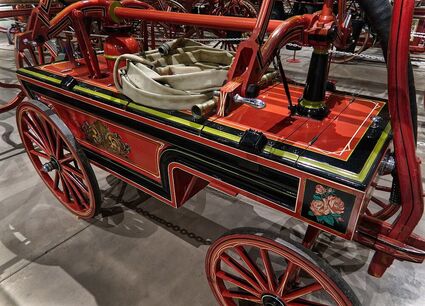 The Hall of Flame is at 6101 East Van Buren St., Phoenix, Ariz. across from the Phoenix Zoo and adjacent to the Phoenix Municipal Stadium.

Editor's Note: This museum has special meaning for our family as our oldest daughter Lisa Brookes-Haws was a firefighter, EMT, and 911 dispatcher. She often visited the Hall of Flame and now has a memorial brick there. We go in memory of her every December 20, the date she passed. As I write this, I thank Chuck Montgomery and Mark Moorhead for hosting us today (December 20, 2021) to a special tour and ride in a fire truck in honor of Lisa.

More articles about this fascinating museum will come in future issues.