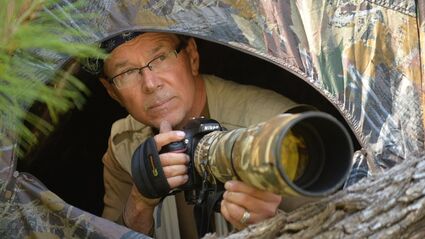 Wildlife photography is a pursuit that can be enjoyed for a lifetime. There's always something new to learn.

This time of year offers plenty of opportunities to take pictures of birds and animals. When you're outside with a camera this month, make it a point to practice your composition skills. As you look at the subject, look at its surroundings, too. In my opinion, some of the best images have the fewest elements. Watch for branches and rocks and other things that obstruct the view or distract from the subject, and re-compose to eliminate those.

Also, control the depth of field to focus attention where you want it. Wildlife photography is not like shooting a landscape, where you want everything in focus. Here, often you want the background to blur. Use larger apertures (a smaller f-stop number) and closer focusing distances to produce a shallower depth of field. This technique will make your wildlife subject the center of attention, just as it should be.

In the Shot: I think the best time to photograph ungulates (such as deer) and horned animals (such as antelope) is during their breeding period. For Coues white-tailed deer, the rut occurs between mid-December and March, peaking in January. Bucks lose their caution and move around more, making them easier to see. There is an old saying that goes something like this: "Find the does and get the buck."

Challenges: The main challenge [is] locating deer and finding bucks. Once I [do], the next challenge [is] to stalk a buck for a photo opportunity. White-tailed deer generally are fidgety and highly nervous, but are less so in breeding season. The final challenge [is] hand-holding a 300 mm lens and manually focusing it so that it would not re-focus on the tall grasses or tree branches.

Parting Thoughts: Studying the habits and habitats of an animal you wish to photograph, and knowing as much as you can about them, will increase your chances to make some great images.

Note: George Andrejko has been a professional photographer for more than 25 years. In 2009, he celebrated his 20th year with the Arizona Game and Fish Department, a career that has taken him to many remote corners of the state to photograph wildlife. One of his favorite places is southeastern Arizona.