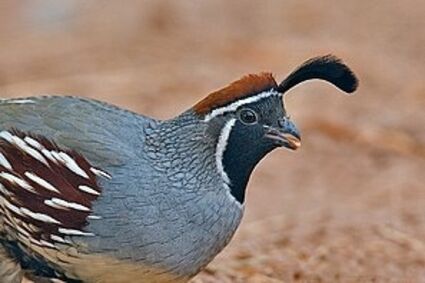 Hunters should look for spots that received localized moisture.

There's just no other way to say it: This is going to be one tough quail-hunting season.

Now that we've gotten that announcement out of the way, that doesn't mean hunters who have high hopes of chasing Gambel's and scaled quail across the landscape should keep their boots in the closet and their shotgun in the safe when the 2021-22 season opened Oct. 15.

"Hunting desert quail will probably be mediocre, generally," said Larisa Harding, small game program manager for the Arizona Game and Fish Department, "but there still are pockets where you can find quail, and most of those are probably carry-over birds from previous years instead of a fresh crop of young birds.

"Quail numbers, and where you'll find them, will depend on carry-over and spotty moisture over the past 18-plus months; if precipitation fell in areas, and at times, when desert quail could take advantage of a local green-up, birds there probably fared better than in our drier regions.

"The storms we got in July may have come too late to produce a large flush in desert quail reproduction. But we've got a lot of tough birds that seem to persist against the odds, so we're hoping if we can get more moisture in the coming months, we'll see quail numbers respond more favorably in the future."

More quail-hunting information can be found on the department's website at http://www.azgfd.com/Hunting/. Another resource for both new and experienced hunters alike is An Introduction to Hunting Arizona's Small Game. Written by Randall D. Babb, the 196-page, full-color book covers where and how to hunt small game birds (like quail), squirrels, rabbits, ducks and geese. It also includes how to prepare and cook your harvest, with illustrations and recipes. The book can be ordered for $16.95 at http://www.azgfd.gov/publications.