In a lab at the University of Washington's Burke Museum in Seattle, Wash., a large block of fossils, on loan from the Petrified Forest National Park (PEFO), was carefully cleaned. Their work revealed a complete skeleton, and bones from several other individuals, of the extinct reptile Revueltosaurus callenderi.

Revueltosaurus callenderi is a crocodilian relative known only from the Late Triassic of North America. These animals had boney armor and the leaf-shaped teeth of an herbivore. The first discoveries of Revueltosaurus teeth were made in the late 1990s. The shape of the teeth led paleontologists to think they had discovered a new plant-eating dinosaur from the Late Triassic.

However, in 2004, the discovery of a complete skeleton at PEFO revealed the creature had the ankle bones of a crocodile relative. The name Revueltosaurus comes from the area near Revuelto Creek in New Mexico where the animal was first discovered.

However, when it came time to use the specimen in the exhibit, they realized the fragility of the fossils would make a display very difficult in the orientation desired by the exhibit designers. 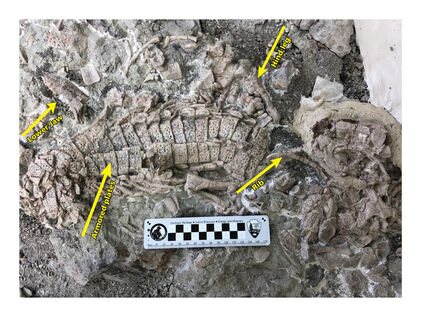 Close Up Of The Reveultosaurus Fossil Block

For the protection of the fossils, they made a realistic painted cast of the specimen for the exhibit. PEFO Museum Curator Matt Smith drove to Washington earlier this summer and retrieved the borrowed specimens. Now that the fossils are back home, Petrified Forest National Park hopes to safely exhibit the impressive block at a visitor center when exhibits are updated in the future.

"This specimen is important because it is the only one in existence in which a large portion of the skeleton is still in its life orientation. It shows how all of the bony armor plates that were on the back of the animal were arranged in life." says Petrified Forest National Park's Natural Resources Program Manager Bill Parker. There is also a partial skull in the block and the jumbled bones of several other skeletons. PEFO is the only place in the world where complete skeletons of this animal have been found

A complete description of the skeleton of Revueltosaurus is currently in press in the scientific journal The Anatomical Record.