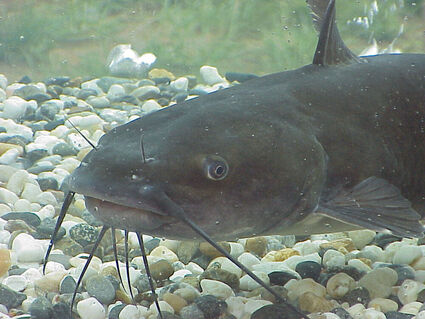 I've come to the conclusion that there are few things better as an angler than feeling "tap-tap-tap" on your line in the pitch dark. Despite the many hours half-dozing in the sweltering heat of the night, forgetting my headlamp is on and wondering why the bugs keep eating me alive, catfish remain one of my favorite fishing targets. Arizona is home to some fantastic spots to catch catfish. Let's focus on simple things to get you going on some great late summer catfishing.

First off, what kind of catfish do we have in Arizona? Channel catfish and flathead catfish are the two heavy hitters. There are three types of bullhead (black, brown and yellow) in many of our desert waters, but they are typically on the small side and a little less desirable. Despite many rumors, we do not have blue catfish in Arizona.

As far as tackle and bait go, in late summer, the key word is "fresh"! In springtime, catfish are genetically programmed to feed on "winterkill," which is the fish and aquatic life that died during winter and are coming downstream after ice-out. I know, you're saying, "We don't have ice-out in Arizona." Well, in the Mississippi and Missouri River drainages where these species are native, they do.

So just remember to use the stinky baits in spring and before catfish spawn (late June to July) and after the spawn, use fresh baits. These can be live or freshly cut baits, nightcrawlers, bugs, crayfish, minnows, liver, shrimp - you get the idea. Flathead catfish will always like live stuff over dead, but in spring, even the "flats" will eat dead stinky stuff.

For channel cats, use a basic Carolina rig with 8- to 10-pound test and a #2 baitholder hook. Treble hooks work great for liver, shrimp or any bait that needs more holding power. Otherwise, the baitholder hook works great. For flathead, it's all about keeping your bait alive as long as possible. Hooking a bluegill or waterdog through the back and keeping enough weight on it so it's just able to make short runs but can't peel off line works best.

A few of my favorite spots for big channels and flathead are Roosevelt Lake, Saguaro Lake, Topock Marsh, and the Community Fishing Program lakes for channels, and the upper Salt River (above Roosevelt Lake), Bartlett Lake and the Imperial Division of the Colorado River for flathead.