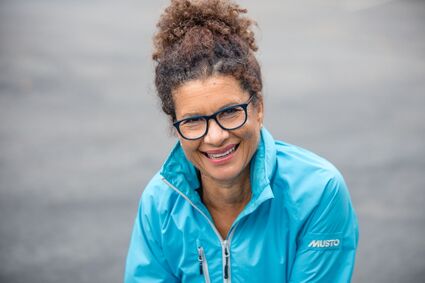 'Sailing is an amazing metaphor of how to get along', says honoree Marie Rogers.

Race has been at the top of many minds this year, which has led to some uncomfortable conversations, self-examination, and commitments for change. For Marie Rogers, a captain, instructor, avid West Coast sailboat racer and the first Black woman to serve as commodore of the historic Los Angeles Yacht Club (LAYC), it's always been about inclusion and sharing her "happy place" – at the helm of a sailboat. Rogers is this year's Boat Owners Association of The United States (BoatUS)/National Women's Sailing Association (NWSA) Leadership in Women's Sailing Award honoree.

The BoatUS/NWSA Award recognizes an individual with a record of achievement in inspiring, educating, and enriching the lives of women through sailing. Roger's nomination cited her "helping sailors move away from the idea that sailing is a white man's sport," embracing the hard work that must be done for inclusion, and her belief that "sailing is an amazing metaphor of how to get along." She understands that sharing sailing – with everyone – is healthy for the sport.

Rogers did not grow up sailing regularly but had learned the basics. When her son, Colin, befriended several Los Angeles Yacht members and was soon crewing on a 70-foot sled for a member who ran the club's junior program, word spread that the young man's mom could sail. She was soon invited aboard and offered the wheel. That man with the 70-foot racing sailboat later became Roger's husband.

Rogers soon wanted to be a sailor in her own right. Not content at being what some referred to as "a yacht club wife," she attended sailing school; earned her U.S. Coast Guard captain's license; studied weather, navigation and diesel mechanics; and bought her own Cal 25, which became the platform for the club's community sailing program. She took groups of women on adventures to Catalina Island, raced a Trans Pac, and served on LAYC's board, eventually becoming commodore in 2019 − a very rare event for a Black woman in America and the only one the West Coast to helm a major yacht club.

What also stood out to award judges is that Rogers had no youth or college sailboat racing experience and learned largely as an adult, eventually becoming an instructor. Her eagerness to share her passion for sailing was apparent to the award judges, as was her generosity and dedication to inclusiveness. For Rogers, leading a major yacht club was not a "job," but rather a calling and something she felt she needed to do in service to the sport. Today, Rogers coastal races aboard Marie, a Nelson Marek 55, with her husband, Bill, and races closer to home on her J-29, Rush Street.

Rogers received the award at the National Women's Sailing Conference, held online and in person, September 11, at Jackson Park Yacht Club in Chicago. For more information go to nwsa.quvent.com.