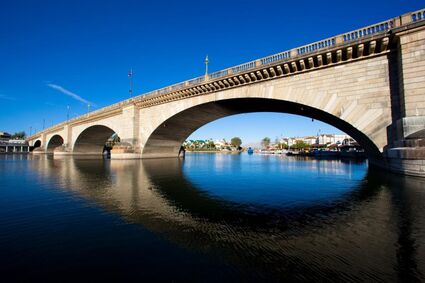 Over a Dozen Events Celebrate the Vision and Innovation of the late Robert P. McCulloch

LAKE HAVASU CITY, Arizona (Sept. 16, 2021) – Fifty years ago, one man's audacious dream came to life when he purchased a bridge in rainy London and moved it to his new planned community in the arid Arizona desert.

On October 10, 1971, the late entrepreneur and real estate developer Robert P. McCulloch presided over a lavish dedication ceremony that attracted an estimated 25,000 spectators to the London Bridge. McCulloch dedicated the bridge in a ceremony that included skydivers, fireworks, marching bands and hot air balloons.

﻿Now this city of 57,000 is gearing up to celebrate the Golden Anniversary of what has become Arizona's number one most-visited built attraction and top tourism draw in the Southwest.

Here at a glance is an overview of major 50th anniversary events planned for October. For further details, visit londonbridge50th.com.

Official Kick-off – 10:15 a.m., Friday, Oct. 1, 2021. The public is invited to a ribbon-cutting ceremony beneath the London Bridge. The ceremony will include live models costumed in Elizabethan-era attire. Guests can take a free tour of the nearby Lake Havasu Museum of History or the London Bridge exhibit, located just steps from the bridge at the Lake Havasu City Visitor Center.

Royal Candlelit Feast & Ball, 7 p.m., Saturday, Oct. 2. The Lake Havasu Museum of History and organizers of the annual London Bridge Renaissance Faire will host a formal dinner feast directly under the bridge archway. As guests dine in 16th-century royal fashion, live models costumed in Elizabethan-era fashions will tell tales about their apparel and England during the Tudor Period. Lucky winning bidders can take a piece of history home from the London Bridge Art silent auction. $100 p.p.

Royal Garden Brunch and Tea, Sunday, 10 a.m., Oct. 3. Guests will enjoy teas from around the world, hors d'oeuvres and mimosas at a tea and brunch under the bridge, also hosted by the organizers of the London Bridge Renaissance Faire and the Lake Havasu Museum of History. Attendees of this modern-day garden party are encouraged to wear their finest and most extravagant hats. $60 p.p.

Elrose Dussault Costume Contest, 11 a.m., Oct. 3. The Lake Havasu City Historical Society and Museum, Havashire Festivals, Inc, Havasu Area Chamber of Commerce and Today's News-Herald will host this costume competition open to the public and held under the London Bridge alongside the Garden Brunch and Tea.

Mind of McCulloch: Innovation Exhibit, 10 a.m., Oct. 15-17. Explore the Mind of McCulloch, the eccentric entrepreneur best known for McCulloch chainsaws, in this comprehensive look inside the innovative thinking of Robert P. McCulloch. See his aquatic, aeronautic and engineering inventions including his seemingly impossible J-2 Gyroplane. Presented by the Lake Havasu Museum of History, London Bridge Beach.

Lake Havasu Symphonic Winds Presents Sounds from Across the Pond, 7 p.m., Oct. 21. The 32-piece Symphonic Winds opens its season performing a variety of arrangements from the Beatles, James Bond films and other distinctly British music selections. London Bridge Stage (under the London Bridge).

The London Bridge Beard and Mustache Contest, 9 a.m., Oct. 23. In pursuit of the hirsute, the Havasu Freedom Foundation is bringing this historic competition back to Lake Havasu City. The contest and judging will take place beneath the bridge. Categories include Mustache, Partial Beard, Full Beard, Foot-long Beard, and New Beard. $25 per entry. 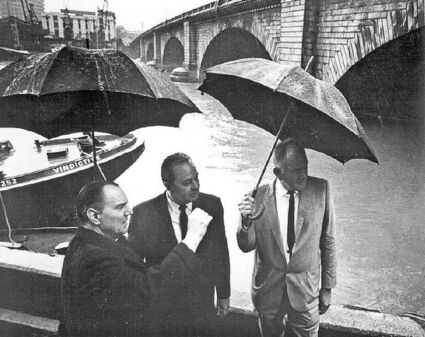 By the time Halloween arrives, more than a few locals and visitors will be greeting each other with "cheerio" and wondering how they ever existed without tea and crumpets.

Learn more about the history of the London Bridge and access the complete event schedule at londonbridge50th.com.