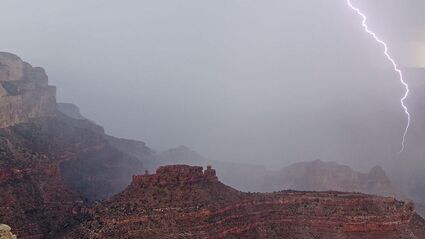 STRIKE! -- Lightning strikes the cliffs and buttes of Grand Canyon.

GRAND CANYON, Ariz. - On July 20 at approximately 2:50 p.m., the Grand Canyon Communications Center received a report of multiple individuals struck by lightning at the Bright Angel Trailhead during a monsoonal thunderstorm.

A 30-year-old male and 28-year-old female victim were initially found unresponsive; the male regained consciousness without intervention. cpr and advanced life-saving interventions were initiated on the female, and she regained a pulse. Due to significant storm activity, air transport was not available, and both patients were transported by ground to the Flagstaff Medical Center. The female victim is reported to be in stable condition at a regional burn center. At least two other patients self-transported to the Grand Canyon Clinic with lightning splash injuries.

This lightning strike is a reminder that Monsoon Season brings not only rain, but dangerous and potentially life-threatening lightning during thunderstorms. Serious injuries and fatalities have occurred at Grand Canyon National Park as a result of lightning strikes. Visitors to the park are reminded that if the sound of thunder follows a lightning flash within 30 seconds or less, they should seek shelter in a building or vehicle or proceed to the nearest bus stop to get on a park shuttle.

Lightning can strike two points up to 10 miles (16 km) apart at the same time. In Grand Canyon National Park, lightning strikes an average of 25,000 times per year.

For more on how to be "lightning safe," please visit Grand Canyon National Park's website at https://www.nps.gov/grca/planyourvisit/lightning-danger.htm.