Where's A Great Place To Camp? 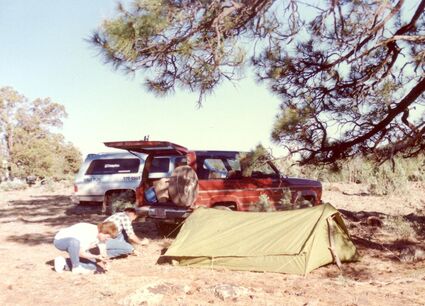 This is John and I setting up camp years ago -- right after we got married. That little tent is one my dad gave me and I was pretty darn good at setting it up quickly.

Camping is awesome, especially if you know some basics.

Choosing a great spot and setting up a camp site is something I've been doing for decades. Of course, when I first started camping, my dad did most of the choosing, but we all helped set up the camp. Where and how we camp still depends a lot on the purpose of the trip. In other words, are we hunting, fishing, hiking, or just exploring and camping? How elaborate our camp becomes is largely dependent on the answer to that question, but the basics remain the same.

If you stay in campgrounds, your choices are limited because the campsites are already marked out for you. John and I avoid campgrounds as a rule, mainly because we don't like noise. A lot of people love campgrounds, though, and they do have their advantages.

For one thing, there is usually a nice smooth, level spot for a tent as well as a table and maybe even a grill. Fire rings are usually also provided, and that saves you quite a bit of labor. There are also usually restrooms at campgrounds, and if you're a tent camper with young kids, that can be a big plus. Sometimes you are allowed to have a campfire in the campground when they are not allowed out in the forest, and that's another big advantage.

Campgrounds at national parks are pretty cool – when I was a kid we traveled a lot in the summer because my dad would teach map reading at different Army bases. Staying at campgrounds in national pwas always something we enjoyed. My mom wasn't really an outdoorsy lady, so a campground was about as wild as she cared to get, but we kids liked it because the national parks usually have a nice amphitheater and the rangers would have programs in the evenings that were a lot of fun.

My mom would have loved the little cabins at the Arizona State Parks. John and I have stayed in them several times, usually when we are on fishing trips. These little cabins are pretty basic, with a small front room with a table, chairs, and a shelf, plus a tiny bedroom in back with a set of bunk beds on one side and a double bed on the other.

The best part? They have heaters and air conditioners! You can't cook inside, but there are tables and grills and large fire pits outside, and each cabin has its own. The bathrooms are usually in the middle of the row of cabins, and they are really nice, with showers and everything.

The granddaughters love them, and they are very reasonably priced, plus you can lock up your stuff while you're off fishing. The mattresses on the beds are covered with heavy plastic, so make sure you bring your own bedding and pillows.

As for picking a spot in a campground or picking a cabin, we usually prefer to walk a little farther to get to the restrooms. Camping right by the bathrooms pretty much guarantees that you're going to be disturbed during the night by flashlights waving around and tiny high-pitched voices. The few times we've stayed in a campground we've chosen a site that is as far as possible from any other site. For most campgrounds you can now reserve a spot online, and you can look at a map of the sites before you choose. I really like that.

With RVs And Trailers

One great thing about tent camping is that you aren't limited. With an RV or a trailer you're limited to fairly good roads and when you're in the forest comma you will often see several big trailers or RVs in fairly close proximity to one another, just because large, open, reasonably level places along good roads are limited. With our Jeep and our tent cot we can camp darn near anywhere. However, the factors that make a good campsite don't change much no matter how you camp.

First of all, you need an area that is level or very close to level. Sleeping on an incline is no fun. Also, you need to have a fairly large clear space if you are going to have a fire. Simply putting rocks in a ring and building a fire inside them is not good – you can set the forest on fire that way. You need to clear a large area down to the dirt, then build your fire ring.

A lot of the time, the good spots already have a fire ring and all you have to do is clear away any flammable stuff for a good six feet all around the fire pit. This six-foot rule not only helps prevent flying sparks from starting a fire, it also means that you're less likely to trip and fall into the fire.

Watch Out For The 'Widow Makers'!

One thing I always look out for is "widow makers". These are large trees with big branches that could potentially fall on your camp, especially if it is windy. We like to find an open area that is surrounded by trees so we have shade and privacy, but the trees are far enough away that we don't have to pitch our tent or especially build our fire right under them.

Setting Up The Basics

The first thing we always do when we've picked a spot for a camp is decide where the tent is going to be. This was especially important when we slept in a little popup tent on the ground. For a tent you'll need to clear a big spot of any lumps, including sticks, pinecones, rocks, etc. Otherwise you'll feel them all under your back all night, even with camping pads.

Recently, we bought a KampRite tent cot and it has made a huge difference. We added a roof rack to the Jeep for transporting it, but it's actually pretty compact. It's just what it sounds like: basically a large two-person cot (with a very comfortable mattress), and a tent that actually attaches to the cot sides to make it snug and private. We absolutely love it, and so does our little French Brittany, Mochi. One of the best things about it is that we are up off the ground which makes it so much easier to get in and out during the night.

After setting up the tent, parking the pop-up camper, setting up the cot tent or whatever, it's time to decide where to put the fire pit. If there is already a fire pit there, put the sleeping quarters upwind from it so smoke doesn't make your bedding stink. Make up the beds and zip all the screens up tight so the bugs don't get in there before you do. We usually put the wood for the fire just a few feet away from the fire ring -- close enough so you can see it and won't trip over it, but far enough that a stray ember won't start anything burning. Of course, if there are fire restrictions in place then you just need a clear, level spot for your gas stove.

Actually, even if fires are allowed I prefer to cook on a gas stove just because cleaning pans that have been on a fire is a major chore. Fires are fun to sit around after dinner to talk and make s'mores, and I dearly love a campfire, but they really make a mess of your pans, and you also need a rack over the fire to put the pans on, which is one more thing to try to clean. Otherwise that soot gets all over everything. Ugh.

If you're going to be camping in one spot for several days and not leaving the campsite during the day, you can get as elaborate as you like. We usually just spend the night and then hit the road right away if we're exploring, or if we are hunting we generally put everything away and lock the vehicle during the day. It didn't used to be that way, but anymore you need to be aware that there are people who will literally steal your entire camp if you leave things out unattended. That's why it pays to be a minimalist when you camp.

Another thing we have learned the hard way is to put as much stuff away as you can before you hit the sack. We've been hit by surprise storms several times while camping – storms bad enough that you know you need to leave now before the roads are impassable. It's just easier if you don't have to run around in the rain folding up stuff and stowing it. 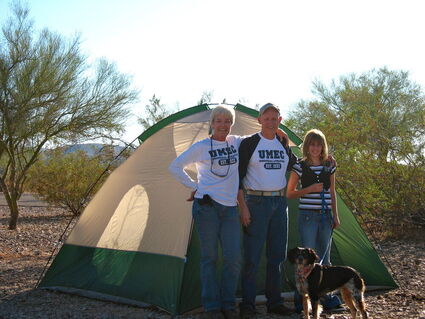 This is John and I with our granddaughter Trinity camping at Alamo Lake many years ago. This big tent was big enough to stand up in, which is something John used to insist on. You could also fit the whole family, including the dog, inside it. It served us well for many years.

Camping is awesome. When you're out in the open far from a city, the stars are just incredible. Food always tastes better outdoors, and conversations around the campfire are the best. Personally, I think camping is one of the best things a family can do together. Camping is an opportunity to teach your kids to be self-sufficient, plus it gets them away from technology. Once you have your gear, camping is also a fairly inexpensive holiday. Your camping gear doesn't have to be elaborate, and you may even be able to borrow or rent what you need.

Stay Tuned For Next Month's Advice

If you have your gear organized, it makes camping a lot easier. By that I mean that all your cooking supplies and food are in one box or bag, bedding is in another bag, etc. We use duffel bags and have different colors for different things. I'll cover all that next month, and talk about how to streamline your camping. I'll also talk about overnight camping when backpacking, which calls for the absolute minimum you can get away with. So stay tuned!