Maggie And The Mountain Lion 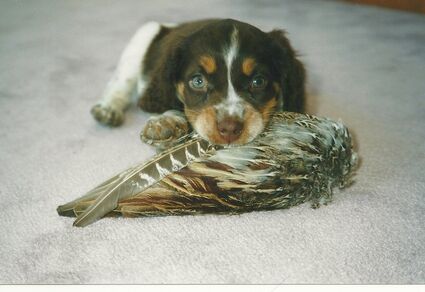 Maggie As A Puppy

• Run in this issue with the permission of Robert Redwine

Most of us in the club are also hunters in our own right, and this story by Robert (Bob) Redwine will touch most of us in some way. Full credit is given to Mr. Redwine of Prescott, Ariz., for sharing this story, and his emails documenting the events of the story. The story is essentially his emails to some of his friends and colleagues. No need to re-write it. It stands on its own.

Not everyone in our membership is acquainted with the mountain lion. The mountain lion now occurs to some degree in habitat in a mass amount of the USA Wildlife habitat from the north central and northwestern portions to the south central plains and desert country to the west. Being a highly secretive nocturnal animal, they are rarely seen by the general public. This incident in Arizona is also a somber reminder that when we are communing with nature with our Bretons – we are not alone. I am rather pleased that most of the "nasty" critters I need to be concerned about when hunting are rabid skunks, porcupines, and the occasional rattlesnake. – R.L. Dalrymple

I am sending this to several people I have hunted with or who have known Maggie over the years. Yesterday, Maggie and I were hunting quail in an area about 12 miles from where we live in Prescott, Ariz. Maggie was attacked by a mountain lion. The attack occurred in a brushy area. She was behind some bushes out of my sight, and only about 30 feet from me when it happened.

I think the fact that she was so close and that I reacted by yelling loudly and running to her may have saved her life. I did see the mountain lion as it ran away through the brush. It was a big one. (An Arizona Game And Fish Warden later estimated that the mountain lion may have been up to 175 pounds, more or less.) I wish I had been carrying something other than a 28 gauge and bird shot.

To The Vet In Time

It looks like the lion probably bit her from the front across her shoulders and chest, and raked her with its front paws. She's lucky to have survived this. Maggie was in surgery yesterday afternoon and spent the night at the veterinarian's. We will pick her up this afternoon and bring her home. It looks like she will need three to four weeks for a full recovery.

A Thanksgiving Thank You

So today (Thanksgiving Day), when we give thanks for all of our friends and family, we will give thanks that Maggie is still with us to enjoy several more years of time in the field doing what she loves to do most.

After sending this message last Thursday, I figured that I owed everyone an update on Maggie's condition. First, thank you to everyone for the replies and concern for Maggie. I gave her all of the requested hugs and pats on the head. I never knew a little brown dog could have so many friends.

It turned out that Maggie's injuries were worse than we first thought, but her recovery so far has exceeded our veterinarian's and our expectations. The worst injuries were the bite to her chest and a slash on her rear leg. The slash on the leg missed a major artery by a "hair's breadth" (the vet's words). If the artery had been severed, she likely would not have made it the half mile back to the truck. She has two drain lines installed in the deep bites. Those will come out tomorrow. There were internal sutures to close the punctures. There are over 79 metal staples that were used to close her wounds. The staples will stay in for 10 to 14 days.

Out Of The Game

Maggie will wear a plastic cone until the staples are removed. Maggie will be out of the bird hunting game for at least six weeks. I am hoping that she can do a little field work and have some fun by the end of January.

I thought you might want to know that Maggie has made a full recovery. I have had her out hunting three times in the last couple of weeks and she is doing great, finding birds, retrieving, and enjoying the hunt. She is a little out of condition, but I would be too after a six-week layoff. I am still amazed at what she went through with the mountain lion and how well she has come back.

And, Bretons, Of Course

I am heading over to Globe, Ariz., tomorrow for three days of Gambels, scaled, and Mearns quail hunting on the san carlos Apache Indian Reservation. I have some friends coming down from Wisconsin and Illinois for the hunt. We will have English Pointers, English Setters, German Shorthair Pointers, and of course, the Epagneul Bretons. Epagneul Breton "Thomas" will do most of the work, but Maggie will see a lot of action too.

This is just a quick note to let you know that Maggie has made a full recovery from the mountain lion attack. I took Maggie and Thomas to Globe last week. We hunted three days on the san carlos Apache Indian Reservation with some friends from Wisconsin and Illinois. The hunting was pretty good. We found six to seven coveys of Gambels and scaled quail each day with 25 to 50 birds per covey.

Maggie hunted all three days. I did rest her a little with long lunch breaks, not bad for a dog who is almost nine years old. Thomas put in all three days and was still bouncing around at the end of day three. The setters were not used to the rocks and ended up with some pretty sore feet at the end of day two. Maggie did a great job of locating shot birds and managed to gingerly pull a couple of quail out of the prickly pear cactus.

I have attached a couple more photo and you can see Thomas has turned out to be a big, strong dog.

Tomorrow is the last day of our season here in Arizona. I plan to take Maggie to an area about thirty minutes from my home, and do a ½-day hunt and finish the season on a positive note.

We Will Stay Away!

We will stay out of the brush and away from mountain lions! 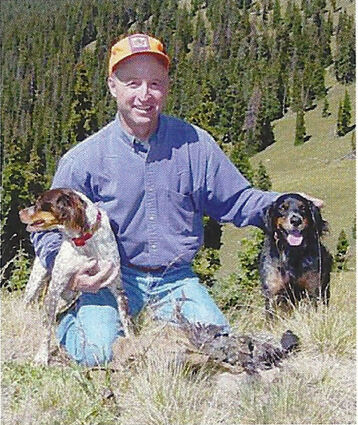 Robert Redwine is a long-standing member of the CEB-US. He has hunted with the Epagneul Breton for 14 years. Bob is an avid hunter of upland game birds. Now a few words about Maggie. Those of you who were in attendance at the 2004 CEB-US annual meeting in Armour, South Dakota may remember Maggie. She was awarded her TAN at the meeting, was Reserved Best Female in the show, and was awarded one of the Total Dog Awards as Dal's Rocky Mountain Maggie. Too good to be eaten by a mountain lion!

Maggie went on to live a full life, she passed away in 2017 just a couple months short of her 15th birthday. She was a very active hunter up until 12 years of age. I've added a photo of Maggie and Thomas, she was 11-1/2 years old in this photo. I know we all say this, but those were two of the best bird dogs I've ever owned or hunted with. Dan Priest has hunted with Thomas, would probably vouch for his skill level.