He Likes Free Rig For Bass In Arizona 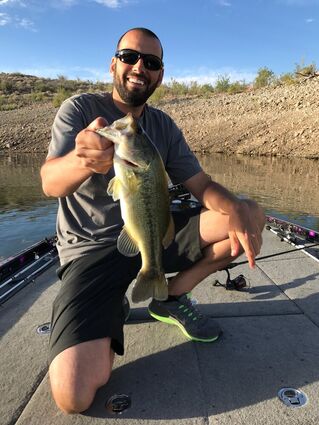 Daniel Elias found out about the Free Rig in early 2019 from Japanese Bass fishermen on Instagram, in posts that weren't even in English. The rig is fairly simple – you use a cylindrical drop shot weight, but instead of a clip, there is just a small loop at the end – a pencil weight with an eye at the top. You simply slide it onto the line before tying on the hook, and it slides freely up and down the line: Free Rig. The Hook Up Tackle (www.thehookuptackle.com) has weights for this technique; just search for free rig weights.

Elias uses a worm hook and rigs the plastic baits weedless – creature baits, finesse worms, etc. He didn't know how the Japanese anglers were fishing the rig at first. He rigged one up and threw it in the pool with a little Berkley Chigger and watched. The weight sinks straight to the bottom, but the bait stays up and sinks very slowly. If you pull it, the bait comes close to the weight. As he pulled it toward the deep end, the bait followed it.

He took the rig to the lake and tried it on 45 degree banks and stair steps, and he was getting lots of bites but not getting them hooked. "I think the baits were so far behind the weight that I couldn't get the slack up," he says, "so I switched to a wide-gap finesse hook made for wacky fishing, and just nose-hooked the bait." That did the trick. Daniel says the Powerbait Jester has worked the best for him, especially the green pumpkin.

The Key Is Length

He throws the Free Rig on a 7' 6" medium Abu Garcia spinning rod that is a little bit stiff. With this rod he can make long casts and good sweepsets. He likes Berkley Nanofil 12-pound-test. It has very little stretch and it's very sensitive but doesn't twist up. To this he adds an 8-pound-test Trilene 100% fluorocarbon leader. The key, he says, is how long the leader is. For this rig he says you need a really long leader – 20 to 30 FEET long. For the Jester he uses a 1/0 Berkley Fusion Finesse Wide Gap Hook. (The Finesse Fusion19 is a weedless wide gap hook) 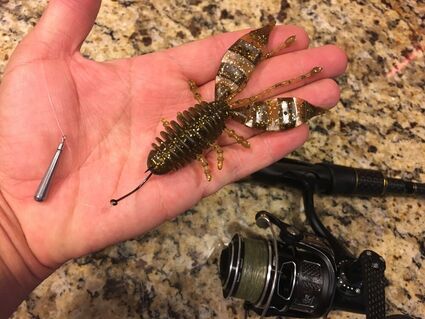 With the drop shot rig being fished to death, this rig is something the fish aren't accustomed to quite yet, so give it a try at any Bass lake. He says if the cover is thick you can Texas rig it, but he adds that you'd be surprised how well that little nose-hooked bait will come through stuff. When the fish bite it, they hang on, and it's really important that you have a big bow in your line while fishing. Sometimes he goes to move it and it just feels squishy – in that case, reel as fast as you can to get caught up, then just sweep and let the rod load up.

Daniel says this technique works best on those 45 degree banks or stair-stepped banks. These give the weight the opportunity to fall, and then the bait just sort of flutters down after it. The Jester is only about 3 inches long, but it's bulky, which creates a lot of water movement. Daniel says you might also try this on grass because the bait will stay up, or use it to fish a stick bait a lot deeper than you normally could.