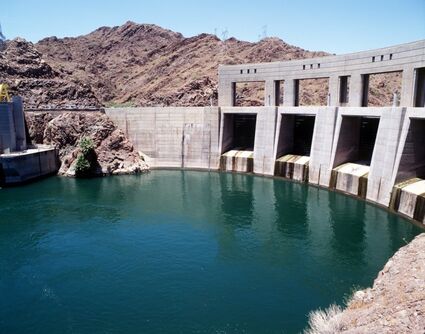 LAKE HAVASU CITY, Arizona (June 24, 2021) – The megadrought in the Southwest has lead to epic water shortages, but there is one bright side. While Lakes Powell and Mead are both under 40 percent of their reservoir storage capacity, the water level of the Colorado River's 45-mile long Lake Havasu, on the border between California and Arizona, remains consistent-as much as 98 percent full in the summer.

In fact, the elevation of Lake Havasu typically only varies from about 446 feet above mean sea level (AMSL) to approximately 449 feet AMSL, with lower elevations typically occurring in the winter months.

The water levels maintain consistent river flow operations and water diversions; nearly 24 million people in southern California, Arizona and Mexico depend on Lake Havasu water. It's said that when you order a bourbon and water in Beverly Hills, the water actually came from Lake Havasu.

The lake's consistent water level protects the massive aqueducts and pumping stations near Parker Dam at the southern end of the lake, where water is diverted to Southern California and Central Arizona.

Think of Lake Havasu as a massive storage tank, a balancing reservoir that remains nearly full year-round. The water turns over completely approximately every 21 days (when water diversion rates are at their highest) as it heads south, maintaining the quality of the lake water. This ensures a consistent water supply for recreational use, according to LakeHavasuHouseBoating.com. Boaters, kayakers, sailors and swimmers can enjoy plenty of water and sunshine year-round.

"While Lake Havasu is stable, it's not a reliable indicator of the rest of the river, which is why we urge people to conserve water wherever and whenever they can," says Briana Morgan, a water conservation specialist for Lake Havasu City.

Adds Terence Concannon, president/CEO of Go Lake Havasu, "We're blessed by highly effective civil engineering, geography and climate for the quality of the lake. That's the reason developer Robert P. McCulloch chose this location to pursue his dream to create a community for hundreds of thousands of newly-minted Arizonians, and one spectacular bridge he had the audacity and marketing genius to ship from England."

On the eve of its 50th anniversary since its official dedication in 1971, the famed London Bridge in Lake Havasu City has a brighter future. A $281,000 lighting refurbishment will replace the bulbs and wiring in 700 lights on the underside of the north and south face of the bridge.

New software will provide versatility to use colors and synchronization for special displays. According to Today's News-Herald, those capabilities will give the city the option to add a little extra flair for special events and holidays, such as red, white and blue for the Fourth of July.

The iron street lamps on top of the bridge made by the British out of the melted-down metal from Napoleon's cannons will remain the same. Work for the project is expected to be completed by October.

"It will be beautiful and accentuate the importance of this bridge to the Lake Havasu community and the state of Arizona. I love the idea of introducing various colors from time to time. The new lighting will serve as an exclamation point for all that this tourist destination has to offer," says bridge historian and long-time Lake Havasu City Visitor Center director Jan Kassies.

Take a virtual tour, including 360-degree views of the London Bridge and English Village: https://www.londonbridgetour.com

There's nothing else like it in Lake Havasu City: a shared Food Hub for passionate food entrepreneurs serving the public with innovative, home-style, small-batch cuisine. The KAWS (Kitchen Art Work Space) represents a noble cause indeed – it allows small restaurateurs the opportunity to develop their new businesses in shared space, without high rent or commercial kitchen equipment costs.

Hungry visitors and locals can sample a wide variety of food from multiple restaurants under one roof. They can enjoy fresh tacos from LaCarcacha; shrimp salad from MAD Lobster; Tropical Strawberry Shaken Green Tea from Wild Coffee; a glass of wine or cold beer from Grapes N Grains; and finish their lunch or dinner with Siren's Bistro & Sweets' decadent chocolate chip cookie ice cream sandwiches.

Food trucks parked outside of KAWS at 2144 McCulloch Blvd N (next to the Grace Arts Live theater) offer even more culinary choices.

There's a Farmers Market on the second and fourth Saturday of the month from 8 a.m. to noon. The first Friday of each month, starting July 2, is ARTNight, a hands-on creative experience and gathering which complements the city's First Friday celebration of art and community. First Friday is held nine times annually; the next event will resume in September.

"One of the major benefits of working in a shared kitchen is the sense of community. We're stronger together, lifting each other up, sharing knowledge and working collaboratively," says Regan Ross-Robertson, operations manager.

"Our customers benefit by enjoying food choices they won't see elsewhere, as they support the next Bobby Flay or Wolfgang Puck."

It will be a hot time in Lake Havasu City over the Fourth of July Weekend and we're not just talking temperature which is likely to be, well, a bit toasty.

The 4th Annual Rockin' the Dock Summer Concert is scheduled for July 3 outdoors at the Havasu Landing Resort & Casino. A $2 roundtrip ferry ride will take concertgoers across the lake from the terminal north of the London Bridge to the event location. Or boaters can take their own craft for a ride and enjoy the concert from the water.

The local Littletown Band, an opening act for major stars like Dierks Bentley, will provide a mix of rock and country. The free event is scheduled for 6 to 10 p.m.

Fireworks will explode over Thompson Bay on July 4, 2021

Fireworks will explode over Thompson Bay starting at 9 p.m. on the Fourth of July. Viewers will watch them launch from directly across the bay from Lookout Point on Spectator Point (at The Nautical Beachfront Resort). A handy map, posted on the Events section of GoLakeHavasu.com, suggests the best viewing spots, including the Nautical Beachfront Resort, London Bridge Beach and Rotary Park. Tune in to KNTR 980AM for a live simulcast with music curated for the fireworks display.

Blast from the past: the original Outboard Championships began in

The famed London Bridge isn't the only thing that links Lake Havasu City to its fascinating past. The city was once home to the premier outboard powerboat race in the world.

Hold this date: in a blast from the past, the Lake Havasu Classic Outboard Championships returns Oct. 15-17, 2021, with heart-thumping, high-horsepower racing in time for the rededication of the London Bridge. The outboard races will be part of the NGK Sparkplugs Formula 1 Powerboat Series. The original Outboard Championships in Lake Havasu City began in 1964 and continued through 1990.

The three-day event will feature racing in three classes: Formula 1, Tri-Hull and Formula Lights. Past Outboard Championship winners and powerboat racers from throughout the world are expected to attend. Powerboats at this revived event will race along the water in Thompson Bay: the original location of the Outboard Championships. Race headquarters and free fan viewing is expected to be at the Nautical Beachfront Resort.

For a complete list of scheduled events in Lake Havasu City, view the special events calendar at https://www.golakehavasu.com/events. Event dates, times and/or details are subject to change. Contact event organizers to verify information.

Lake Havasu City is situated on the eastern shore of Lake Havasu on the Colorado River border of California and Arizona. The city was established in 1963 by Robert P. McCulloch, Sr. as a self-sufficient, planned community. Lake Havasu City is located on what is known as "Arizona's West Coast," three hours' driving time west of Phoenix, 2½ hours south of Las Vegas and four to five east of the Los Angeles region. As part of the northern and western limits of the Sonoran Desert, Lake Havasu City and the surrounding area feature outstanding biodiversity.

Rated one of the top 100 best bass fishing lakes in America, Lake Havasu is ideal for catching large and small-mouth bass and striper fishing. The region is also host to extensive off-road trails and undeveloped stretches of river. 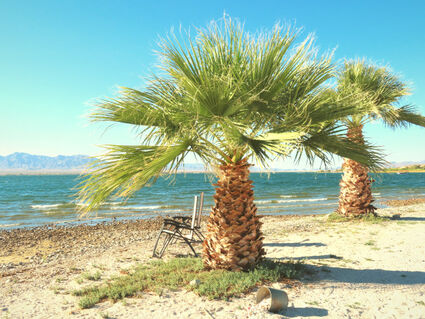