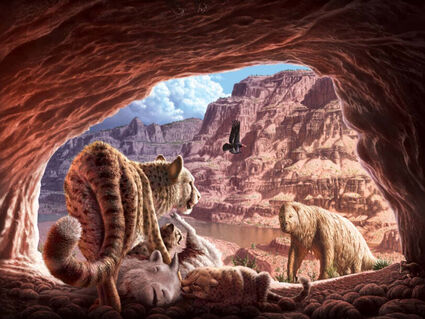 The publication documents more than 1.2 billion years of paleontological history in Grand Canyon. The rich fossil record uncovered during the inventory showcases flora and fauna from ancient Precambrian microbial mats to Pleistocene megafauna - including Shasta ground sloths, Harrington's mountain goats, and the American cheetah - which lived in Grand Canyon's limestone caves during the most recent Ice Age.

"Our understanding of the fossil record advances with new discoveries uncovered during each field season. The Grand Canyon paleontological inventory, and similar work in other parks, reward us all with new and more complete information about prehistoric life and the ancient world where they lived," said National Park Service paleontologist Vincent Santucci.

Grand Canyon's substantial stratigraphic record shows the canyon has been home to ancient sharks, Permian plants, proto-reptiles, and now-extinct mammals as the environment shifted from hospitable oceans to harsh deserts over hundreds of millions of years.

The Grand Canyon National Park Centennial Paleontological Resource Inventory represents the largest park-specific fossil inventory in National Park Service history. The centennial of Grand Canyon in 2019 became the ideal backdrop for this project and required the collaboration of a team of paleontologists, NPS staff, and a number of park partners including Grand Canyon Conservancy and the Utah Geological Association. Their efforts, which included the first-ever park Paleo Blitz at Grand Canyon and a special National Fossil Day outreach event, improved understanding of ancient environments, extinction events and a created a new catalogue of ancient life at Grand Canyon.

Thanks to the collective contributions of National Park Service staff, park partners and other paleontologists, this new paleontological inventory catalogues fossil specimens in the park's museum collection and will contribute to new educational and interpretive efforts on Grand Canyon paleontology.

The objective of the paleontological inventory was to identify the scope, significance, distribution and management issues associated with fossils in the park. Through this effort, the NPS compiled paleontological resource information for the public, park managers and staff to better understand the non-renewable paleontological resources under their stewardship, and in turn helps inform future park planning and decision-making which may relate to park fossils.