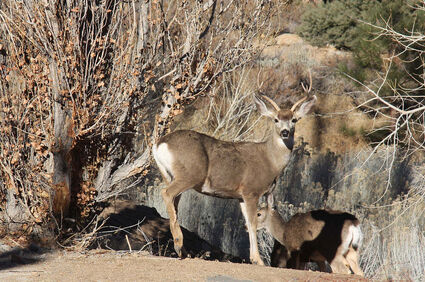 A reward for information leading to the arrest of the person(s) responsible for the poaching of several mule deer in October near Congress, Ariz., has been increased up to $10,000.

AZGFD officers found the remains of several deer, including bucks and does, believed to have been killed between Oct. 18-29, 2020, near the intersection of Date Creek and OX Ranch roads, northwest of Congress. It was determined that the animals had been skinned and the meat was taken.

There were no deer hunts underway during that time period. Evidence discovered at the scene indicated this was not a one-time event, and that the suspect(s) spent considerable time in the area.

"The location is near a well-traveled area along Date Creek Road," said Brian Dietz, Wildlife manager. "Anyone who was scouting, recreating or just passing through the area may have witnessed something that could help us solve this case.

"Poachers are not hunters. They are criminals stealing from the residents of Arizona."

Anyone with information is encouraged to call the department's operation game thief hotline at 1-800-352-0700, or visit https://www.azgfd.com/ogt/ and refer to case #20-003449. Callers can remain anonymous upon request.