Mark Kile At Roosevelt Knows How To Catch 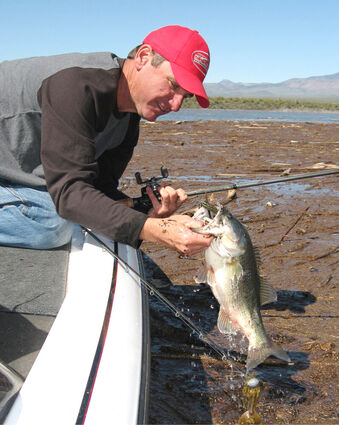 Mark Kile was the guy to watch at any local tournament a few years back. We were lucky enough to go out with him several times at his home lake, Roosevelt, and he just flat knows how to catch them. This time of year, Kile would be catching forty-plus Bass in half a day at Roosevelt, usually with at least one kicker over five pounds. "The fish are moving into the shallows," he'd say, "and some of them are spawning." Kile says that throwing a worm in a channel three to five feet deep will often catch fish this time of year.

This Time Of Year

Also, this time of year there is often a lot of debris floating on and just below the surface of the water because of runoff, so you need to be careful when you're running the lake. Slow down or you risk damage to your lower unit. Also, the bad news about ramps is that when all those logs and limbs have drifted ashore and lodged on the ramps, it makes launching a bit difficult unless you clear a spot. Just don't expect it to stay clear. But the fishing is definitely worth the effort.

Mark advised anglers to head toward the main creek arms and start fishing toward the back. He's always had very good luck throwing football jigs in the channels at about five feet or less. You can use the big ¾-ounce, or half-ounce and tip it with a Yamamoto Psycho Dad in green pumpkin. If you're fishing in the backs, chances are you'll have a lot of floating stuff to get through, and that big jig really does the trick.

Lake Will Produce In Spring

Kilesimply makes short casts to the centers of the coves in shallow water. The jigs get to the bottom almost immediately, then all you have to do is make little hops with them. The bite is light, so watch for line movement and keep a good feel on your line. If it feels like somebody cut the line, a fish has your jig.

Kile says he's had days when he and his clients would catch over forty fish on drop-shots and Texas rigs. "Both ends of the lake will produce in spring," he says. If a cold front moves in it may slow things up for a day or two, but the fish will be right back on the bank in no time at all.

Fish drop-shot rigs on spinning gear with light line. A lot of people prefer fluorocarbon line because it has hardly any stretch, which makes bite detection and hooksets much easier. Usually, 10-pound-test would be the max. Tie on a small worm hook or mosquito hook and leave a long tail of line – at least a foot. The weight goes at the end of this tail, so that it rests on the bottom while the hook and lure float above it.

Shaking the rod tip slightly leaves the weight in place on the bottom while the worm shimmies and wiggles, suspended up off the bottom. It's a killer technique for Bass. You can buy special drop-shot weights, or just pinch a split-shot to the end of your line.

You can use darn near any small plastic on a drop-shot rig. Robo Worms, grubs, Yamamoto Kut Worms, small lizards, and small creature baits are the most popular. In the dirty water you'll want to use something dark that the fish can see. If you find yourself in clear water, go with a Shad color.

This is a very good technique for kids because you don't need to cast or even work the bait much. Just get the boat in shallow water, move over the channel, and drop the rig over the side. Shake it a bit as the boat moves you along, and the fish pretty much hook themselves. Just pull up on the rod and reel quickly when you get a bite.