This Day Was A Success For The Kids, The Dogs, And Their People 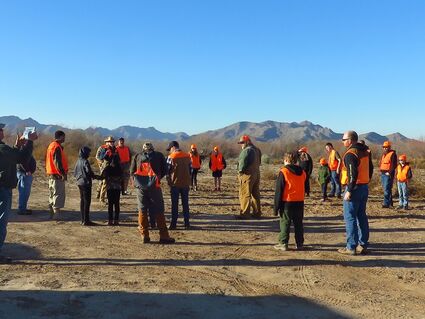 Before the hunting started, the kids and parents were given a thorough gun safety talk.

There are a lot of great organizations in Arizona full of people who enjoy sharing their love of the outdoors with others, especially kids. One of them is Arizona Quail Today, which hosted its first Kids/Youth Fun Hunt at Desert Creek Sportsman's Club in February. There were kids, dogs, birds, shotguns, food, and tons of fun.

The kids got to shoot sporting clays and chukar and spend the day outdoors with their folks and some great people. I found out about it on the Arizona Upland Hunting page on Facebook. When there are kids and dogs involved, Margie and I want to be there. The shoot was put together by Ryan Rice of Arizona Quail Today.

A Fun Hunt For Kids

This was a fun hunt for kids, to give them an opportunity to get some gun safety instruction, learn about habitat and conservation, practice on some clays, hunt behind a dog, and try to shoot a chukar or two. Tony Marquez of Desert Creek Sportsman's Club donated a lot of the birds, and there were plenty of experienced hunters and guides there to help the kids. A lot of us brought bird dogs along.

EB Dogs: Stars Of The Show

We brought Mochi with us and we were delighted to see that there were four other French Brittanys there as well. Shawn Sullivan of Epagneul Bretons of the Southwest US (a Facebook page for us EB lovers) brought his two beautiful EB's, Maverick and Remy. Maverick spent a lot of time in the field hunting hard – he found all the birds for the kids we followed out. Remy is still just a pup, and she really didn't like Maverick going out without her, but the kids made sure she got plenty of attention and love.

The morning started out with everyone visiting and checking out each other's dogs, then Pastor Ryan opened things up with some safety instruction for the kids and parents. It was fun but got all the points across. The best part was when one of the guys got on all fours to be the hunting dog so the kids could learn what to expect and how to keep the dog safe.

Then half the kids started with sporting clays and half went to the fields. The kids went out hunting two at a time, with their dads and a very experienced hunting guide with them. They all loved watching Maverick work the field, especially when he suddenly made a ninety degree turn and went on point. Patrick Moore of Blacktree Kennels was the guide with the kids we followed out, and he was fantastic with the dog and with the kids.

As soon as the dog was on point, the kids and Patrick moved forward, keeping in line with each other. Patrick gave instructions and encouragement, explained exactly how he was going to flush the bird, and reminded them that he would give them one of two commands: "kill it; kill it; kill it", or "no bird; no bird; no bird"!

The Kids Did Great

I was actually very impressed with the decisions that the kids made – kids aren't stupid, and those kids could tell when a shot was safe and when it wasn't. Several times, one of them would pass and let the other kid take the shot because he was in a safer position relative to the other people in the field. Those kids did great, especially considering how many people there were out there with them to keep track of.

When Margie and I hunt, we only have to worry about each other and Mochi. These kids had the dog, the guide, their folks, the dog's owner, and a couple of nosy reporters to watch out for. They did great.

A Memorable Day, Then Lunch

Have you ever heard the term "hungry as a hunter"? After a morning of shooting, hunting, fellowship, and playing with dogs, the kids were treated to lunch. It made for a day I'm sure they'll never forget. I really enjoyed meeting all the great guys and ladies who spent their day giving a bunch of kids the opportunity to find out how much fun it is to hunt behind a good dog with their folks.

People Who Made This Happen

3. Valley of the Sun Quail Forever

- God for giving us another great day in the field

If you aren't familiar with Desert Creek Sportsman's Club, you should check it out. Tony has worked hard to make it a great place to hunt birds, and he also has clays and waterfowl hunting, plus Dove and quail in season. Margie and I love to take Mochi out there, and Tony is a fantastic dog trainer. He really helped finish Mochi up into a great little gun dog, and he does snake avoidance training as well.

Snake Avoidance Training For Your Dog

If you're going to hunt your dog in Arizona, you really should get your dog trained in snake avoidance. It's not fun, but it sure isn't as bad as getting bit by a rattler. If your vet doesn't carry lepto and rattlesnake vaccine, Midwestern University's Animal clinic does. We had Mochi vaccinated there.

Most kids don't realize that hunters and fishermen are the first and the greatest conservationists. Before the Federal Aid in Wildlife Restoration Act of 1937 (Pittman-Robertson Act), a lot of species were on the verge of extinction due to commercial hunting pressure and habitat degradation from humans.

The Pittman-Robertson Act took the 11 percent excise tax on firearms and ammunition and instead of going into the Treasury, it is now given to the Secretary of the Interior to give to the states. It's handed out based on a formula that is based on the area of the state and the number of licensed hunters in that state. There is a similar act for excise taxes on fishing gear. The money is used not only for Wildlife and habitat, but also for hunter education and shooting ranges.

In addition to that, almost every hunter and fisherman I know belongs to at least one, and usually several, conservation associations such as Quail Forever, Rocky Mountain Elk Foundation, Christian Hunters of America, Rocky Mountain Bighorn Society, Arizona Sportsmen for Wildlife, Arizona Wildlife Foundation, etc. The list is huge. These guys all put in long hours as volunteers, working to improve habitat for Wildlife and helping the Game And Fish Department out with a lot of education and improvement projects. 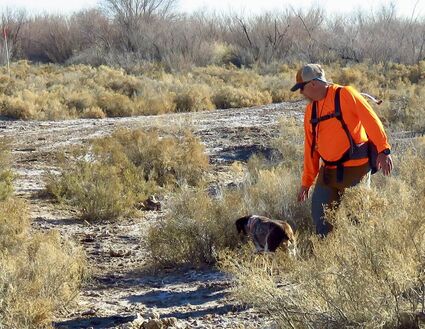 Patrick Moore of Blacktree Kennels guided the kids and worked with the dogs.