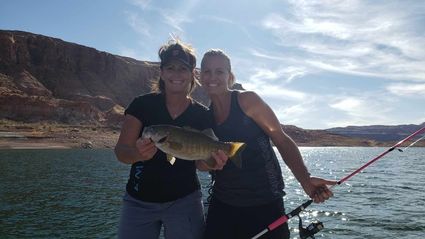 Water temperature at Wahweap Marina has dropped below 70 F in the early mornings. It has been a long, hot summer, but the intense heat is finally departing. Daytime air temperature is still in the 80's but next week drops into the 70s. The long-awaited Fall season is late, but very welcome now that it is finally coming. Hopefully, fish will respond positively to the cooling water.

This past week they were a bit lethargic. The best time to catch stripers and bass was from 8-10 a.m. Then it slowed down for the rest of the day. Expect that morning bite to continue. Launch at dawn and fish hard until 10 a.m. or until the morning bite is over. Use a variety of techniques including trolling, casting and spooning during prime time. Here is some advice for each technique.

Stripers and bass are deeper than usual due to the high water temperatures. Troll deeper for better success. It is possible to catch fish on shallow running rattletraps and small jerk baits, but the catch rate will go up when the depth of the trolling lure increases. There are still some trophy fish out there hanging out at 40 feet looking up for a fish imitating lure to swim by at 30 feet. The Strike King 10XD in Sexy Shad color still has the potential to catch another trophy fish or two. Down-riggers are another deep water option. Regardless of the technique it is best to target the 40-60 foot depth to catch the most stripers.

This is the best technique to catch bass. Cast the plastic bait out and let it sink to the bottom. Work the bait slowly along the bottom. Pause and then move the bait again. Patiently wait for an interested bass to pick up the lure and run with it. Smaller bass will be at 20 feet or less. Bigger bass will be at 30 feet. Trophy bass will hit near 40 feet. It is easier to catch a bunch of little bass to get you going. After a while, let the bait go deeper to catch a 3-pound smallmouth.

This technique is the best method to catch stripers holding in deep water. Find a school on the graph, drop spoons through the school and let it hit bottom. Jig it up and down 5 times. Then reel up as fast as possible for 10 turns. Stop and then jig up and down again to target mid-range fish. Speed reel to the surface and then drop to the bottom and start over. Get that first fish to hit and the rest of the curious stripers in the school will all start chasing the spoon.

Lately this has been the most productive method used to catch stripers in the southern lake. Use a size 2 or 4 bait hook. Tie a weight on about 3 feet above the hook or just use a ¼ ounce jig head. Both methods work. I use the jig head because I like to have constant control of the lure and be able to set the hook as soon as I feel the bite.

Catching success for all species will increase with cooling water. Reports of bluegill hitting bait in shallow water are common. Target them in shallow water when a few random bluegill appear. Striper boils may have a second spike as water cools. Walleye are still willing to hit trolling lures on 15-20 foot flats in the middle and northern lake. Bass are always hanging out on isolated rock slides.

So, enjoy fishing! It will continue to improve as the water cools. The best fishing temperature in springtime is 62-68 F. Expect perfect water temperatures during the next few weeks.