'You Can Catch A Bunch Of Fish' 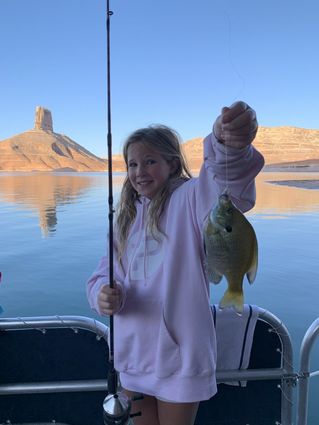 In the past week, Stripers have been feeding on the surface at dawn and dusk. They were not dependable each day but when it was about time to give up, they would surface again. The surface action was short, only a half hour or so, but very rewarding when they finally surfaced. This pattern is repeating lakewide. A few boils randomly early and late. When the school went deep, more fish hit spoons when the school showed up on the graph.

Smallmouth Bass were cooperative in 20-40 feet of water off rocky slopes and ledges next to deep water. The standard plastic grubs and Ned rigs continued to entice Bass.

Perhaps the best fishing reported last week was for bluegill and catfish near camp. Worms were the best bait. Best timing was after dark when the weather was cooler. One little boy was very surprised when a huge Largemouth Bass ate the worm he was using to catch bluegill.

Another excellent report came from Piute Canyon on the San Juan. A big striper boil blew up at noon providing lots of big Stripers to the boat that was just lucky enough to be in the right place at the right time. When the boil ceased Stripers mingled under the boat and were happy to eat spoons dropped into 40-60 feet of water.

Here is what to expect. Shad schools that have been hiding in shallow water may move due to the change in weather and drop in temperature. If they move in the wrong direction Stripers will find them and boils will increase. If they successfully sneak away to their next hiding spot, there will be no boils. Bass will stay on the rockslides and slopes where they were previously located.

My suggestion is to continue to look for surface action early and late. This will be the best time to catch both Bass and Stripers. If boils are not present, then switch over to bass fishing on rocky slopes and submerged rockslides. Oh! And it is a good idea to troll mid-day with a big strike king X10 crankbait if you want a chance to catch a huge striper.

It is still Lake Powell – You can catch a bunch of fish if you spend your time wisely. At press time, lake elevation was 3598 and water temperature was 76F.