From Brett Hite, Here Are Some Great Fall Fishing Tips 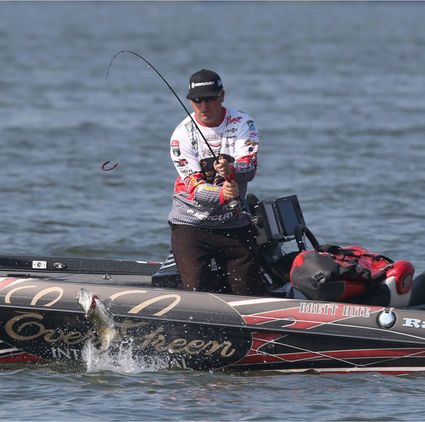 Bass Pro Brett Hite has won over $1.6 million fishing tournaments. We got to go out with him on Bartlett a couple of years ago, and he gave us some great fall fishing tips. He's a cool guy.

Brett says keep it basic in the fall. He likes topwater, jigs, and drop shot rigs for the most part this time of year. He took us into the river at Bartlett and fished rocky banks that pretty much no one else fished, targeting banks on the deeper side of the river channel where it swings close to shore.

Early on, he throws topwater on a medium heavy glass rod with #20 test Sunline. He likes shad-colored, slightly bluish buzzbaits, Zara Spooks or Vixens, and big Ricos. Brett likes to have a bit of chartreuse on his topwater baits – for example, the clean Spook with bone and chartreuse.

In the fall, you have to cover a lot of water to find fish, he says, so he picks up a Spook or a Vixen and just goes down the bank looking for schools of Bass and Shad. Usually after they come up for a topwater he can slow down and use a jig or a drop shot to try to catch the bigger ones. Basically, he's looking for schools. If it's noon and he comes to a pocket with twenty or so Bass in it, maybe one will come up after a topwater, but that lets him know they are in there and he can switch to a deeper bait.

His tip: Pick a big cove and fish the whole thing. Start at the mouth and pay attention. You're trying to get a pattern in your head. Say you get five bites – make note of where those five bites were. Were they on a channel? A tree? A point? How deep were they? If he notices that they are on flats with a sharp drop, he uses the Navionics on his graph to find other spots like that on the lake.

Brett prefers to catch them power fishing, but if he has to he'll go to finesse to catch them. Because Bartlett gets beat up by so many people, he often has to go to a spinning rod. Another of his favorite rigs is a shaky head jig with a screw to hold the worm. He fishes that with 7-pound-test Sunline Sniper. Let it drop to the bottom, then fish it like a worm til you hit structure, then shake and pull it over the structure and just let it sit for minute.

When he's fishing a drop shot at Bartlett, he says that tungsten pencil weights are way better in the rocks – they are skinnier and only get hung up half as often. He uses 1/8-1/4 oz weights, and a 1 or 1/0 light wire Rebarb Hook on a 10 – 12-inch leader. He says just measure off the length of a Plano Stowaway box for the leader. Then watch the graph – if you see them up off the bottom, lengthen the leader. If they are hugging the bottom, shorten it. His favorite lures for drop shot rigs are Yamamoto slim Senkos, 6-inch Robo Worms, and Yamamoto Shad Shape worms (fished on circle hook).

Figure Out A Pattern

For jigs he uses River 2 Sea jigs with a Yamamoto Twin-tail Hula Grub. He likes weedguards because they help him get through brush and trees. You can swim a jig, hop it down the bank, drag it down a channel, fish it over a point – options are endless. Bartlett can be tough, but if you follow Brett's advice and figure out a pattern, things suddenly get a lot easier.