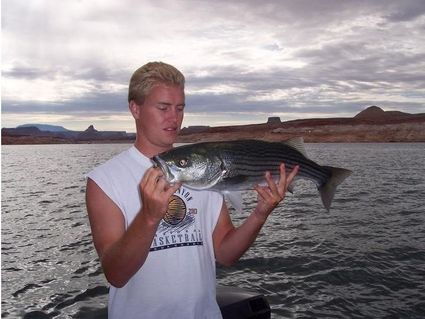 We began the weekly fish-sampling trip with a quick run to Warm Creek before the sun cleared the horizon. Last week we found quick boils and caught

stripers on surface lures and spoons. This week was a bust with no fish on top and no fish showing up on the graph. That was what I expected so we headed uplake. We scanned the surface as we ran directly into the rising sun. Leaping stripers are often backlit while heading east in early morning light, making them easier to see. Still no fish showed up.

Recent reports from the southern lake indicated stripers are in deep water. Some are as deep as 80 feet. They will eat bait or react to spoons at that depth, so it is crucial to watch the graph for any sign of stripers or shad. Knowing that fish would be deep, we headed to Last Chance where we often find deep schools in the winter months. I was mainly watching the graph, but trolling at the same time in hopes of catching a random fish at 20 feet.

The first hour was humbling as we caught no fish and saw only a blank screen on the graph. During the second hour, a few shad schools finally showed up in about 40 feet of water. I did catch a nice smallmouth in open water while trolling. During the third hour, we finally saw a striper school

under the boat. We stopped the boat, zipped in the trolling lures and dropped spoons. Both anglers hooked up on the first drop. My fish got off, but my partner landed the first striper of the day. The school then moved away and we could not relocate it. Then a small boil blew up with frisky 8-inch stripers chasing tiny shad. My partner caught and released two tiny stripers and we were done for the day.

Uplake has better fishing according to reports from Escalante, Bullfrog, and Good Hope Bay. Hot surface water keeps most of the adult fish in deeper water. Reports of stripers boils came from Willow Creek in the Escalante, and Good Hope Bay. Surface action was quick and stripers went down quickly to cool off. The best technique was to use a slab spoon that could be cast to surface feeding fish and retried quickly along the surface, or dropped down to deeper water as soon as the striper school went down to cool off. Find the deep school on the graph, drop the spoon to the holding depth of the fish, and then jig it up and down. Speed reeling works well for suspended fish.

Smallmouth bass are still cooperating. Larger fish are holding at 20 feet or deeper. Drop plastic grubs or Ned rigs to the bottom and work the rig slowly along the bottom. Trolling along a deep rocky shoreline may be the best technique for catching a big smallmouth bass.

Largemouth bass and bluegill will be near any brush still under water. Bluegill often use houseboats for shade, so kids fishing off the back of the boat can target them. A tiny jig with a piece of worm may provide a youngster with his first fish from Lake Powell.

Some of the most active fish in warm water are catfish. Worms and table scraps may attract a school of catfish. Sit in a lawn chair on the back of the boat and watch the rod tip. A quick twitch notifies you that catfish are in the area. Wait for the rod to twitch the second time before setting the hook.

There are some huge catfish in the lake this year so be ready for a strong fight.

Note: At press time, lake elevation was 3,602 and water temperature