The victims and tragedy of 9/11 are forever remembered. 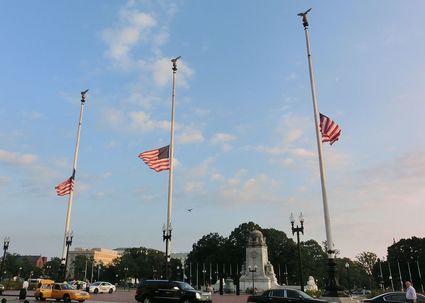 AT HALF-MAST -- In Washington, D.C., three American flags fly at half-mast on Columbus Circle (outside of Union Station) on Patriot Day 2013. The flags of several US states and territories can be seen also flying at half-mast in the background.

In the immediate aftermath of the attacks on September 11, 2001, President George W. Bush proclaimed Friday, September 14, 2001, as a National Day of Prayer and Remembrance for the victims of the tragic events.

A bill to make September 11 a national day of mourning was introduced in the U.S. House on October 25, 2001, by Rep. Vito Fossella (R-NY) with 22 co-sponsors, among them 11 Democrats and 11 Republicans. The bill requested that the President designate September 11 of each year as Patriot Day.

The flag of the United States is flown at half-mast at the White House and on all U.S. government buildings and establishments throughout the world; Americans are also encouraged to display flags in and outside their homes. Additionally, a moment of silence is observed to correspond with the attacks, beginning at 8:46 a.m. (Eastern Daylight Time), the time the first plane, American Airlines Flight 11, struck the North Tower of the World Trade Center on September 11, 2001.

Patriot Day is not a federal holiday; schools and businesses remain open in observance of the occasion, although memorial ceremonies for the 2,977 victims (this number excludes the 19 hijackers who also perished) are often held. Volunteer and service opportunities are coordinated by the Corporation for National and Community Service.

Note: For the anniversary of the beginning of the American Revolution and the holiday celebrated in Massachusetts, Maine, and other states, see Patriots' Day. For the Quebec holiday, see National Patriots' Day. In the United States, Patriot Day occurs on September 11 of each year in memory of the people killed in the September 11 attacks of the year 2001.