'On The Road Again'

There Are Beautiful Drives Near Alpine And Springerville, Arizona 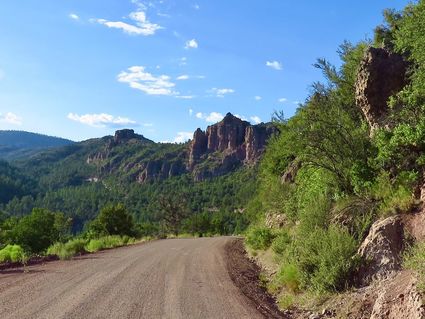 There Are Beautiful Drives Near Alpine And Springerville

There Are Beautiful Drives Near Alpine And Springerville

If you're looking to get out of the heat and see some gorgeous country where it's cool and green, I've got the perfect road trip for you. If you've ever been to Alpine or Springerville, you already know how pretty the Apache-Sitgreaves Forest is, and I've got a couple of back-road drives for you that don't require 4WD. In fact, we saw a lot of RV's on the second part of our road trip.

The first leg of our trip starts just across the road from Luna Lake, which is just east of Alpine. Watch for sign on the south side of the road that says Blue 24 miles – it's FR 281 but also Apache County 2104. It's well-signed so you won't miss it. Once you're on that road, there is basically almost no way you can get lost.

Because all the campgrounds are closed and there is a lot of private property, there are almost no places where you can pull off the road or take a side trip. Also, much of the road is steep on both sides and narrow, so you can stop, but you can't really pull off. We stopped a few times to take photos, but we actually never met another vehicle on the road the whole time we were on that first half.

The first half of the road, Apache 2104, follows Turkey Creek and the Blue River so you get lush vegetation and beautiful scenery almost the whole way. There are some old buildings that make good photos, and some striking rock formations as well, including hoodoos. You'll pass the Blue school and the Blue library, but don't expect to be able to get any supplies or anything in the town of Blue. From what I read, the population was just 36 at the last census.

Once you get down to Blue Crossing, you drive through the Blue River and head northwest on Red Hill Road. This part of the road gets a big more rough, with washboards on some parts, but it also has the most magnificent rock formations. We did meet a couple of vehicles coming the other way on this half – and they were trucks towing enormous horse trailers, the really long kind.

Again, there isn't much opportunity to pull off on this road, but it's the drive that counts here. It really is beautiful. It will take you at least a couple of hours if you don't stop.

We had gotten delayed by a side trip on the way to the Blue River drive, so by the time we got off Red Hill Road it was getting toward dusk. We found Forest Road 37 just a little north of Red Hill Road on Highway 191 (previously Highway 666!), so we drove down that road and in a fairly short time we found a great little side road to pull off and camp. We had seen a sign saying that this area was part of the Mexican Wolf re-introduction, and in fact we heard the wolves howling a lot that night. We also heard a big elk huff at us – maybe our tent was in his path. Even with the moon, the stars were phenomenal.

In the morning we decided to just keep going on FR37, and follow it all the way up to FR249 so we could check out Sierra Blanca Lake, which neither of us had seen before. FR 37 is a great road, suitable for just about any vehicle. It goes through several areas that were badly burned in 2011, but also plenty of gorgeous forest. We saw two herds of mule deer, a flock of turkeys, and many birds and chipmunks along the way.

When we got to the intersection of 37 and 249, we turned west on 249 and soon saw Sierra Blanca Lake on our right. This is a beautiful lake and it's right by the road. It has trout, but no launch ramp, and you have to hike in about a quarter of a mile to fish it. Not too far down the road from the Lake is one of the prettiest areas you'll ever see – Three Forks.

This is where Boneyard Creek and the North and East Forks of the Black River come together. There are pull-outs on both sides of the road here, but there was only one car besides us, and we never saw the person in the other car. I bet he was down fishing in the river.

Three Forks is absolutely gorgeous with the streams, forest, and meadow. On the north side of the road where we pulled off, an old road that is closed to vehicles makes a dynamite hiking trail. My map says it's FR58. We walked down that road a little way and it is just amazing. One of the best parts about this area is the fact that you literally don't see any trash on the ground. I hope that if you go there you will help keep it that way.

On the south side of the road the pull-out has a little kiosk with some information about Three Forks, and we met a man who had pulled over to look around. I got to talking to him and mentioned that we had heard wolves the night before, and he told us that he was backpacking the Black River and ran into three of them when he walked around a bend in the trail. He said they were as freaked out as he was, and everyone involved took off.

Originally we had planned to take 261 north past Big Lake and Crescent Lake to get back to Springerville and head home, but since we had already been on that road before, we decided to take FR285 instead. This road goes north off 249 just before Big Lake, and it passes several small lakes as well. One beautiful spot that you pass fairly early in the drive up 285 is Crosby Crossing, where the East Fork of the Black River crosses the road, or rather, goes under the road. There is a big grassy valley there and with the river going through it and the forest all around, it's a magnificent view.

Later on down the road you pass San Salvador Reservoir on your right, which also was full, and just a bit further on there is a road to the west that will take you to Slade Reservoir and Water Canyon Reservoir. This road is definitely a 4WD road, so if you don't have that, you'll have to walk in to see them. It isn't very far. They are beautiful little lakes, but neither has any fish in it, so hardly anyone goes there. We drove out to them and enjoyed walking around and seeing all the birds.

Back on 285, soon you'll come to Little George eagar Reservoir on the left. It's marshy, but it has water, and it's right next to the road. My map app says the full name includes eagar, but the sign there left it out. The next stop you make will probably be just before you get to Springerville, at a place called Grand View Overlook where you really do get a grand view of both Springerville and the forest, although this area is one of the previously burned parts.

From there, Springerville is just down the road and you can catch either 260 or 60 and head toward home. We took two days for this trip – the first day we did an unplanned side trip that turned out awesome, and then did the Blue trip before finding a place to camp on 37. All the rest of 37 and 285 we did in one day, and we were back home in Phoenix by 5:00 pm.

But I admit we are early risers and we are minimal campers so getting on the road by 7:00 am is no problem. If you want a beautiful place to cool off, I highly recommend the Apache Sitgreaves Forest near Alpine and Springerville. The Tonto National Forest is closed because of COVID and fire danger, but not Apache Sitgreaves. The improved campgrounds are all closed, but there are plenty of places to camp in the woods.

Tips For Reducing The Trash You Have To pack Out

Before we leave on a camping trip, I open all the food we are taking with us and re-package it in sturdy, waterproof containers that I bought at the grocery store. You can store these in the cooler and not worry about the contents getting wet as the ice melts, plus when they are empty, they stack easily and compactly, with zero trash. I even put chips and crackers in these containers – they don't get smashed and broken that way.

For dishes, we have plastic camping dishes. Just give them a quick wash and put them back in the camping bag. Same with silverware and coffee cups. We use our Stanley travel mugs so we can take them in the truck with us as well.

When we are just camping for a quick overnight stop I use my JetBoil for coffee and to boil water for a Backpackers' Pantry pouch meal. Just boil water, pour it in the pouch, and let it sit for 15-20 minutes. The only trash you'll have is the pouch. I have tea towels and wash cloths in the camping bag, and we wash up ourselves and our dishes with cloth towels. We hang them over the camp chairs to dry overnight and just put them back in the bag to be laundered when we get home. 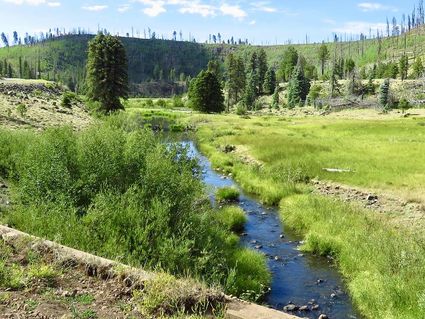 The East Fork Of The Black River At Three Forks

For drinks, get everyone an insulated bottle and re-fill them with ice water from a big jug. We have a Stanley jug with a top that latches on firmly so it doesn't ever spill even if it tips over. We fill it with ice cubes and filtered water before we leave home. Another collapsible water container is just filled from the tap and we use that for washing up.

If you want tea or flavored drinks, you can bring a canister of water flavoring along. I love the peach tea. I make coffee with the French press attachment for the JetBoil, or with suspending baskets in metal cups.

If you think ahead, you can save yourself hauling home a lot of stinky trash. You would be amazed at how little you will have if you follow these tips.