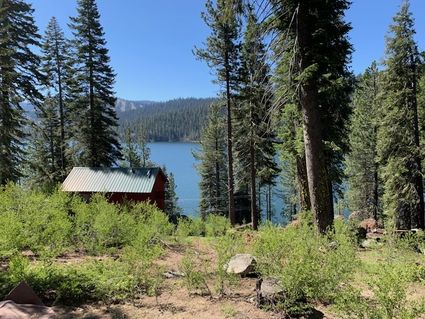 Jimmy Buffett might have been the son of a son of a sailor, but I grew up as the son of a sailor with one less degree of separation. My youth was spent traveling all over the western U.S. to Hobie Cat regattas. Our weekends and summers were filled with my younger brother, and I was packing up our sleeping bags and Star Wars figures into the family adventure wagon for a weekend near a lake or ocean for sailboat racing, campfires, and smores. Our first family adventure wagon was a 1973 converted Dodge tradesman van. My Dad built out the classic benches that convert to a bed interior while Mom made custom cushions with curtains to match. Dad also made custom racks on the roof to carry one Hobie Cat on top of the van and a second on the trailer behind. My Dad thought it was a great idea. I distinctly remember an incident where a stern highway patrol officer in Utah disagreed with him. At the same time, we chuckled from under the van curtains watching the show play out. I am sure Dad could see us giggling in the windows behind the officer. He attempted to keep a straight face and explain why putting a Hobie Cat on top of a van was a very reasonable thing to do. As we grew older and more restless on road trips, the family eventually traded up to a Class C RV for more comfort, a real fridge, and a shower for mom.

My Dad made a habit of taking us to all the national parks and sights to see along the way during our trips. Our family photos albums are full of exploration, adventure, and stories. You can learn a lot about America as a child staring out the windows of an RV. My strongest memories are from my Dad’s happy place, Huntington Lake, CA. Each August, he would use a week of his vacation to take the family to camp at the Deer Creek campground on the lake edge.

He went to great lengths to get the same campsite each year where we could sometimes park to the dismay of my brother and me when we had to pitch our tent twice to move to the “good” campsite next to the lake. At the time, I didn’t realize how impactful these family trips were on the person that I am today.

Unlikely Jimmy Buffett, I wasn’t able to duck when responsibility came calling. I met “the one,” got married, had two beautiful daughters, and began to raise a family of my own. As our children grew, they had a distinctly different view of the world than we did. Places to go were valued more for the strength of their wifi signals and their Instagram worthy backgrounds than to the natural beauty to be discovered. We did get them out to explore, but not nearly as much as my generation did, and there was a lot of kicking and screaming in the process. I often wonder how much I complained about being forced to visit all the amazing national parks I have been to.

The great pause we have experienced has brought about much reflection for all of us. The forced calm of the Pandemic, coupled with my parents' recent passing, led me to revisit Huntington Lake in my mind.

To think of the smell of early evening campfires against the backdrop of the calm of the lake when the wind shuts off in the valley below. To wake up to the mist rising off the lake long before it is safe to get out of a warm sleeping bag. Watching the wind lines fill in over the water as the valley below warms.

As the world began to awake from our great pause, I decided it was time to revisit Huntington Lake.

It has been nearly 20 years since my last visit. My wife and kids were consumed with work, college exam prep, and the strength of their wifi signals, so I resolved to just hop in my adventure wagon and go. I packed up my converted Sprinter Van, set the navigation to guide me from San Diego to the Sierra Nevada mountains, and set the laser-guided cruise control to 70.

Passing through the central valley heat was easy enough as a long quiet drive can be useful for the soul.

As I entered the foothills and instantly began that sensation that I had been here before as the rolling hills became larger and larger near the base of the mountain. As a child, I remember watching the roadside in anticipation of the elevation markers during the climb up the hill, 6000 feet, 7000 feet, and then up and over the Tamarack pass at 7,585 feet. The only thing that was different about the climb this time was the lack of need to watch the engine's temperature gauge with the modern rig making easy work of the climb.

As I slid back down the pass, the lake quickly came into view like a dear old friend coming through the front door of your house. I beelined for the launch ramp dock just in time to catch the sun going down over the end of the lake. I was back, and it looked as I remembered it from my childhood.

The forest service told everyone the campgrounds would be open again, but they were still locked up, and someone forgot to mention to the locals about the change in plans. Typical. As it was now time to call an audible on my plans for the evening, I did what seemed reasonable. I sought out the nearest bartender to seek directions from the locals.

Although I had visited Huntington Lake probably 20 times before, I never noticed the privately-owned resort and campground called Cedar Ridge Resort that the bartender recommended. This simple omission is a reminder that even the places we visited so often before hold new discoveries to uncover.

The Cedar Creek Resort is a lakeside campground that has been in constant operation since the 1920s.

They have a mix of full hookup RV sites, tent sites, and small wooden cabins that date back to before the great war sent so many off to fight for freedom. The current Manager at Cedar Crest was happy to take me in without a reservation, but first, there were stories to be told and songs to be sung. I needed to quickly get out of City mode and “reacclimate.”

It turns out that most days, Donnie, the Manger, can be found around happy-hour playing his 6 string on the outside patio. He plays with the understated finesse of former pro who might be one degree of separation from your favorite country-western star. Or maybe it's because he spent the 70’s in fast airplanes flying just above the tree line. Either way, Donnie has fantastic stories to match his cowboy pilot persona. There is the one where he lost his pilot’s license for illegally landing a seaplane on Huntington Lake “just because.” Or there is the one about the propeller that spent a decade underwater attached to a crashed navy seaplane before they liberated it from its watery grave. Stories so far from reality, they can’t be believed until you just happen to glance at the walls in the bar and spot the mangled propeller and a picture of the seaplane it came from.

I spent several days re-exploring my childhood memories at the lake and creating new ones from those beautiful accidents when a plan goes to crap. I made sure to visit my Dad’s favorite spot on the lakeside. I made peace with his passing, thanked him for all the good memories, and importantly, thanked him for teaching me to explore.

With my heart and phone camera full of memories, I made my way back down the mountains to the sea.

At home, an exciting thing happened.

Sharing the pictures and videos of my adventure made my daughters wish they had come along. 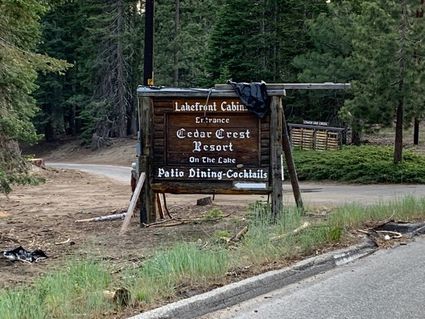 Discovering that there were internet connections where they could post pictures of waterfalls to their friends got them curious enough to pull out a map and start looking up all the cool places we could explore. As I write this article, we are planning our next trip, and they are picking the destinations.

We may be picking the destinations by how Instagram worthy the photos might be and how strong the internet signal is. Still, I’m OK with that as long as we are getting out from behind the devices to see this beautiful country of ours.

If this story inspires you to go hear some of Donnie’s tall tales, then tell him I say hello. Then make some plans of your own to revisit a place special to you and pass on the stories to kids or grandkids.

They don’t know what they are missing, and it’s up to you to get them curious to get out and make stories of their own.