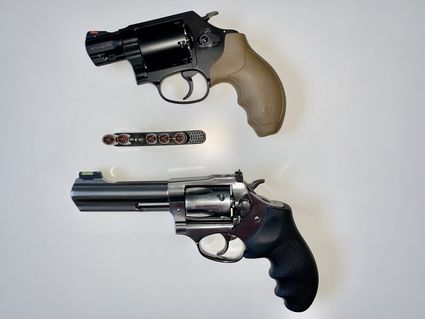 Revolvers are reliable but give you lower capacity.

Take Time To 'Try It On' And Practice

We are currently in the process of buying a new handgun for our granddaughter who is soon moving out on her own. She has been shooting for years, but the only pistol that actually belongs to her is a Ruger .22 semi-automatic pistol. Now don't get me wrong – if a .22 is all you can shoot, it's better than nothing, but for self-defense I'd prefer her to have something with a little more power.

First off, let me emphasize that all of the advice in this article is my opinion. Take my advice or don't – so far, it's still a free country. So here goes: The most important thing to consider when buying a handgun is fit. The back of the gun should snug into the web of your hand between your thumb and forefinger, and you should be able to reach the trigger easily with the pad of your forefinger.

Our granddaughter is on the small side, so she loves grandma's Glock 48. The Glock 48 is a 9mm semi-automatic pistol that is the same size as a Glock 19, but it is narrower. This is because the Glock 19 standard magazine holds 15 rounds of ammo in a thicker magazine called a "double stack". The Glock 48 has a "single stack" magazine that holds 10 rounds, so the gun is thinner. This thinner profile means that smaller hands can easily hold the gun and reach the trigger.

The only way to know for sure if a gun fits you is to try it. You have to go to a gun shop that has a lot of different pistols and try them on. If you have a friend or family member who is a member at Shooters World or another indoor range, ask if they can take you along. Members get to rent guns for free and also get discounts on ammunition. Nothing takes the place of actually trying the gun out.

After fit, the next most important thing is your ability to operate the firearm. In a semi-automatic pistol, you need to be able to pull the top part (the slide) back after inserting the magazine, so that it can feed a round into the chamber. This is called "racking the slide" and in some guns it can be tough. The proper way to do it is to hold onto the slide (the top part), and push the body of the gun forward smartly, then let go.

If you have trouble doing this, there are all kinds of aftermarket stickers and little parts that you can put on the slide to give you a better grip. But you still need the hand strength to be able to do it. If you can't rack the slide, give that gun a pass. There are plenty of different guns to try until you find one you can handle easily.

You may think that a smaller gun is easier to operate, but that isn't necessarily true. A semi-automatic works by using the slide action to power the next round into the chamber, and for that, the gun has to be held pretty steady. If your hand moves back with the gun too much, it won't have the power to feed a round and you'll be standing there with a gun that won't fire. No Bueno. You need to handle that gun with authority. The smaller the gun, the harder that is.

If you're an absolute beginner and the semi-autos are too intimidating, try out a few revolvers. Revolvers are super reliable and virtually never mis-fire unless the ammo is bad. With a revolver, you have fewer rounds and they take a little longer to reload, but there are speed loaders and strips for them as well. Margie and I both carry revolvers when we are in the CanAm off-roading, because even if a revolver is full of dust, it still works. You can't always say that about a semi-auto.

A single action revolver has a hammer that must be cocked back before the gun can be fired, just like in the old westerns. A double action revolver doesn't have a hammer – you just pull the trigger. But you can also get a revolver that is SA/DA, like the smaller one in the photo – it has a hammer, but you don't have to cock it back – you can just pull the trigger good and hard and steady, and that will cock and fire it both.

Firing it that way takes a second longer, but gives you one less thing to remember. I practice both ways with mine. A small revolver is not a problem – it doesn't misfire any more than a big one, which is basically never with good ammo. Our youngest granddaughter absolutely loves even my big revolver and she's tiny.

If you're buying a gun for home defense, a major consideration should be the ammo. If you ever have to use that gun in your home to defend yourself, it will most likely be in low-light conditions. Where will that bullet go if you miss? Do some research and get ammo that won't go through the walls and hit a family member or a neighbor. They make frangible ammo that is made to come apart on contact, so you might check that out.

If There's An Intruder

For home defense, you'll want to keep the gun next to your bed along with spare magazines or speed loaders, a good tactical flashlight (check the batteries now and then), and your phone. In our classes, we were taught that if you hear an intruder you stay in your room, get behind the bed (or some other cover), call the police, and leave the phone line open and on speaker. You yell for the intruder to identify himself, tell him you have a gun and that you will shoot him, and that you are on the phone with the police. Make sure you tell the police where you are and what is going on.

Use the tactical flashlight to blind him if he is dumb enough to continue on into your room. We were taught not to go chasing them around the house. The yelling and lights are also so that if it is simply a family member coming home drunk or something, you don't risk mistaking them for a home invader.

For low light help, you can get lasers and flashlights that will mount right to your gun, and you can also get sights that look like tiny TV's that mount on your gun and you see a red light that shows you where it's going to shoot. A laser will actually make a red dot on the target. These take some getting used to, because they tend to magnify every little shake of your hand, so it looks like a red light dancing all over the place. This brings up another point.

If you are not going to take the time to get some training and a lot of practice with a firearm, you are probably better off without one. If you are ever in a self-defense situation, you will be under a great deal of stress, probably in the dark, and maybe having just been woken up. You need to be able to pick up that gun and operate it automatically. This takes practice. Lots of practice.

Take some classes – even though Margie and I have both been shooting all our lives, we take classes as often as we can. Partly because they are fun, but also because we always learn something, even after all these years. 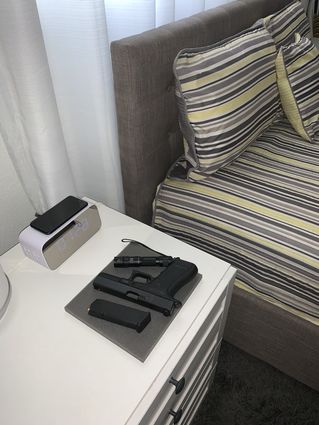 Keep your gun, spare mags, flashlight, and phone by your bed at night. If there are kids to consider, get a lock box that you can open in the dark. There are several brands available that will unlock when you place your fingers on the pads.

Get to the range often, even if you only have time to empty a couple magazines. The more you fire your gun, the more confidence you will have with it. With our granddaughter, we are letting her try out a lot of different guns. She tends to be shy of larger calibers and sensitive to recoil, plus she has small hands, so we are concentrating on .380 pistols until we find one she can handle easily and feels good about.

Don't be intimidated – the salesmen aren't going to be mad at you for wanting to hold a lot of guns. Take a friend with you, preferably one who knows something about guns but won't try to convince to get the same one he or she has. Rent the gun and see how well you can operate it. It might take some time, but you'll find the perfect gun for you – that's why so many different guns are made, after all – because everyone is different.