Things To Do Around Williams (Part 1) 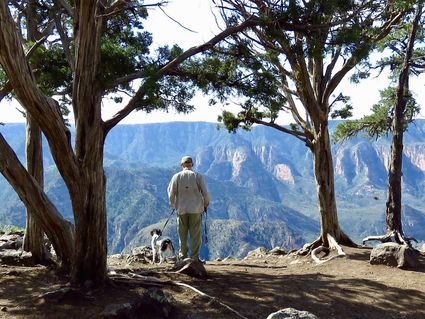 Sycamore Canyon rivals the Grand Canyon for beauty, in my opinion. Sycamore Point lets you walk around and get several different, spectacular views of the canyon.

Maps Are Guides To So Many Cool Spots In Arizona

Somebody asked me recently how John and I find so many cool places around Arizona. The answer is maps. I have a lot of maps. When we were planning our recent trip to Williams, I spread several maps out on the kitchen table: a DeLorme Atlas and Gazettee; a Forest Service Map of Kaibab National Forest Williams, Chalendar and Tusayan Ranger Districts; a National Geographic Trails Illustrated Topographic map of Sycamore Canyon and Verde Valley (#854); and the BLM Williams 1:100,000-scale topo map.

Why So Many Maps?

The reason I use so many maps is simple: some are more detailed than others, and often different maps include different things. An interesting item on one map may not show up on another. The Gazetteer is great for the big picture and major attractions, while the 1:100,000 map will have a lot more detail but show a smaller area. The National Geographic Trails Illustrated Maps are fantastically detailed, and even show hiking trails, but they cover an even smaller area.

A Combination Of Maps

I use all the maps when planning a route so that we can make a big loop and see as much as possible. When we are actually on the road, I use a combination of the paper maps and the maps on my phone: the Topo Maps app is awesome because a blue dot shows you where you are in real time. It's invaluable for helping you make the correct turns, especially when what you want to see isn't clearly marked on any of your paper maps, and isn't even marked on the actual roads.

Case in point: Perkins Tank, which isn't even named on some of my paper maps and not even shown on others. Also, the road that goes to it doesn't say it goes to Perkins Tank until you are halfway down it. Without the app, it would have taken us a long time to find it.

Another Help: The Internet

One last thing that helps me plan our trips is the internet. If you do a search for "things to do near (place)" you will find a lot of cool stuff. If they aren't marked on your map, you can mark them on there yourself. And if directions are given, you can print those out or mark them on your map and be sure to include road names or numbers.

Once you have all the places you want to see circled on the map, you can plan your route. We had originally planned to take the Perkinsville Road all the way to Williams, but we had so many things planned that we ended up taking I-17 and I-40 to get there so we'd have more time for exploration.

Our first side trip was Bull Basin Scenic Drive, which takes you around behind Kendrick Peak through some very pretty forest. It takes about an hour each way, if you don't get a bit lost, which we did on the way in. When you are on I-40 headed west from Flagstaff to Williams, take exit 178 at Parks and turn north. Make a left at the T intersection and when you get to the General Store, turn right and go north on FR 141. About 11 miles north of Parks you go north on FR144 for about three miles to FR 90. Turn right on 90 and drive about five miles to FR90A.

There was supposed to be a trailhead here – Bull Basin Trailhead, but the road actually dead-ended at a nice new-looking ranch gate, which was locked and clearly marked "no trespassing". I looked at hikearizona.com and they are still saying that the trailhead is there, and the trail sounds pretty cool – with an old cabin and two springs, but we didn't ever see the trailhead. We went left from the gate but it was just a spur, so we backtracked, took a little side road south, took some photos, and headed back to 40. The last part of this route is for high-clearance vehicles only.

Next along I-40 was actually on old Route 66. Back at Parks, we turned west on Route 66 and in just a few miles we came to Oak Hill Snow Play Area. Park there, then cross the street to the trailhead for Keyhole Sink. This trail is only about a mile long and mostly flat, and it goes to a cool sink that has a horseshoe-shaped sort of cliff behind it and water. It didn't have much water when we were there, but it was pretty.

Look hard at the rock walls on the left and you'll find a whole rock covered with Petroglyphs. The little fence and gate and the flowers near the sink made this a very pretty and enjoyable hike.

We had planned to do Laws Spring and the Beale trail, but that drive is almost as long as the Bull Basin drive, so we saved it for next time. We next visited Kaibab Lake where we saw a beautiful bald eagle. Apparently this lake was dry a few years ago but it's full now and very pretty. There is a big campground here and it was open. Next up was Cataract Lake, which is just across the highway from Williams and has two big day-use areas, one on each side. The west side is actually a county park. No campgrounds here – both sides are day use only.

Just down I-40 a few more miles is McClellan Reservoir, which is actually right next to the highway. We pulled off and there really isn't much parking there – the dirt road just widens. No one was there except a family with young kids. It's a very small reservoir, but pretty, and you can tell that people sit under the trees and fish there. Between there and Ash Fork is a place called Johnson Crater, and a hiking trail that goes to an old railroad tunnel, but that's another place we saved for next time because the trail is over three miles and will take us a while. We still wanted to see Ash Fork Stone Dam and The Steel Dam nearby it, so we drove on toward Ash Fork.

On the map, it looks like you can take the Monte Carlo interchange to Steel Dam, but there is now a truck repair place there and the road is blocked off. So take Welch interchange and go north on the dirt until you reach old Route 66, which is paved, but just barely. The pavement is in rough shape. Eventually you will find a sign that says Ash Fork Stone Dam. The road is dirt and I'd recommend high clearance vehicle. There was one Family Fishing and playing in the water there and the man told me that his great-great grandfather helped build the dam.

It's a nice lake with fishing (license required), but it's at a lower elevation so it's more of a cool-weather place. The same man told us that you could get to within 100 yards of Steel Dam by taking the gasline road farther west down Route 66, but we couldn't find it. There is a hiking trail from Stone Dam to Steel Dam, but it was way too hot for us to try on this trip. Yet another thing to save for next time!

We went back to Williams at this point, and visited Santa Fe Reservoir and City Reservoir before taking the Perkinsville Road (also named Coconino 73 and in Williams, 4th Street) south to visit Dogtown Lake, White Horse Lake, JD Dam, Sycamore Point, and Perkins Tank. I don't have space to tell you all about that – it will have to wait for next month, but I don't want to leave out Sycamore Point. 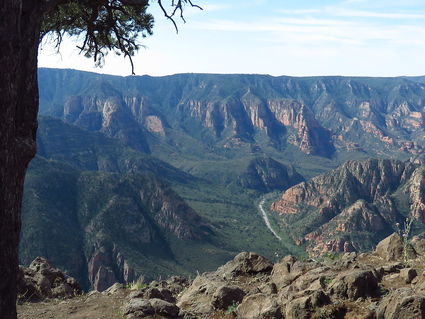 Sycamore Point, about nine miles past JD Dam, gives you a fantastic view of Sycamore Canyon. Definitely worth the drive!

You can walk around on the point in either direction and get even more amazing viewpoints. Red rocks, cliffs, the creek bed, hoodoos near the base of the cliff you're standing on – it's breath-taking. There are lots of hiking trails that will take you into Sycamore Canyon, but those are more of a cool-weather trip. Even the edge of the canyon at Sycamore Point is in junipers, not pines. But it is truly gorgeous and worth the drive.

Next time I'll tell you all about the rest of our trip and the things we saw south of I-40. There are tons of things to do around Williams and some of the most beautiful country in Arizona is there. Please help keep it that way and obey fire restrictions and pick up your trash. Thanks!