28-Miles Across The Desert 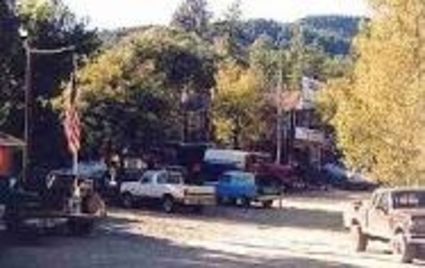 28-Miles Across The Desert And Up

Crown King adventure is waiting for you,

Crown King, the top of the mountain,

Carol and I just returned from a few days in Crown King, Ariz. This was not our first trip but as always it was an adventure. And, not only an adventure because of the 28-miles of rough and winding road.

Part of the adventure for us was in going just a few miles north west of the valley with its' several million people and finding this very small place in the pines with very few people. The attitudes were much different than what we are experiencing in the valley now. People were laid back, friendly and enjoying themselves.

What, Where is Crown King Arizona?

Crown King is an "Old Ghost Mining Town" located in the Majestic Southern Bradshaw Mountains. We are just an hour and 15 minutes from North Phoenix. After leaving the I-17 you will travel on an old historic road, formerly a railroad bed for the Famous "Murphey's Impossible Railroad." The steam engine ran during the mining era from 1904 to 1926 only to be discontinued at the beginning or the first World War. Now left behind is the charming drive through the Sonoran Desert, on the dusty washboard road for 28 miles. The closest Cool Pines and Snow Enjoyment to Phoenix.

Our temperatures are 15-20 degrees cooler during the day and up to 30 degrees cooler at night. Magically you will cross over the famous "Magic Bridge" and go from the spectacular Sonoran Desert into the Cool Majestic Pines. The Town has several attractions and events year round. Many visitors ride trails with quads and UTV's then enjoy live music and drinks at the Famous Crown King Saloon, The Mill Restaurant, and The Prospector Smokehouse and Grill. When your day is done make sure you have the best lodging and cabin rentals to rest and relax. Come visit us at the Crown King Cabins, Suites, ( formerly named "Bradshaw Mountain Guest Ranch"),and for larger groups The Crown King Bunkhouse. Crown King host's 2 Novelty Stores and several Eating Establishments. Don't forget an excursion to Horse Thief Basin, a man-made lake with fishing available.

(An excerpt from Bruce M Wilson's "Crown King and the Southern Bradshaws: A Complete History")

The largest mine in the Bradshaws, and the one that gave its name to the local settlement was the Crowned King Mine. Years later, the name was shortened to its current form, Crown King. The first claim located in the Crown King group was the Buckeye, by Rod McKinnon on July 1, 1875.

O. F. Place had been developing his claims in the area of the future Crowned King Mine for some years, using contracted miners. He and a man named Moody were working the Buckeye claim in 1882 with six men. Local legend maintains that the first claim in the Crowned King group was discovered by a Walnut Grove schoolteacher named John L. Taylor who traded it to Place for a saddle (or saddle horse, depending on the version).

Place then gave Bradshaw City storekeeper, Noah Shekels, a half interest in the claim in payment for a debt at the store. In any case, the vein continued to show promise, and in June, 1887, Place was visited by an eastern capitalist, George P. Harrington. Harrington had originally come to Arizona to investigate placer claims on Lynx Creek for a brother of Governor N. Oakes Murphy and railroad tycoon Frank Murphy. He came back to Arizona that fall, and in November returned to his home in Edinburg, Illinois, after spending a month in the Bradshaws with Place.

Carol and I stayed in one of the Crown King Cabins (Cottage By The Creek). What a delight to hear the wind in the pines and not the normal traffic and sound of the city. Do you remember stars in the sky? You can actually see them in Crown King.

The Crown King Cabins, Suites, and Bunkhouse, (formerly Bradshaw Mountain Guest Ranch) is the vision of The Woodward and Paccioni Families. My father, the late Pastor Dan Woodward of the Chapel of the Crowned King, began venturing to Crown King in the early 1970's in our vintage jeep up the "back roads from Lake Pleasant" when the remains of the Orabelle and Tiger Mines were still evident. We were called "Jeeper's".

My family loved the Southern Bradshaw's and the majestic pines so much they bought and built a cabin in the "Acres" and we upgraded to "Sloper's", ( a term Crown King locals use to describe "Summer Cabin Owners"). We spent every weekend here and eventually my parents bought the Crown King General Store.

Open year round in the pristine Southern Bradshaw Mountains, tucked away in the cool pines of Crown King, Arizona, you will find the Crown King Cabins, Suites, and Bunkhouse. Let the simple pleasures of years past take you on a memory-making excursion. Your own mountain retreat awaits you with all the comforts of home! Come and enjoy this well kept secret, away from phones, faxes and computers in this relaxing wilderness escape. ( If not, WiFi and Satellite TV is available.) Who knows, you may even lose yourself in a good book! 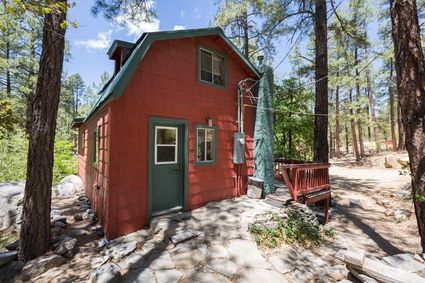 Cottage By The Creek

The beautiful gardens on this Property invite you to relax and enjoy the serenity of this pleasurable hideaway. All Lodging is fully equipped including: kitchens, fire pits for evening campfires, barbecues and outdoor sitting, picnic areas, and gardens. You may even enjoy our "Hammock Haven" for a nice warm summer evening. Our guests are entitled to enjoy the Crown King Cabins, Suites, and Bunkhouse in a quiet and undisturbed manner; therefore, we assure quiet enjoyment and a wholesome environment. - Crown King Cabins

The owner Taryn could not have been nicer or more helpful. Her family have been active in Crown King since the 1970's. She knows the history and her gardens are beautiful.