2020 Will Be Remembered For Many 'Unusual' Events 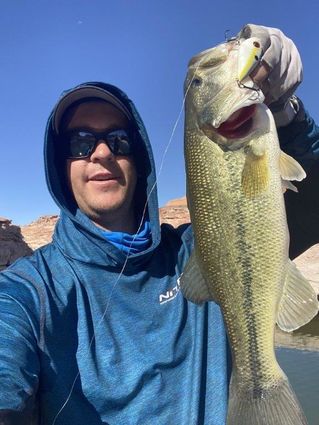 Lake Powell water temperature in the morning remains at 72F. It will get warmer but now the wind is still mixing the warm surface layers with cool deep layers of water. The lake remains very busy with lots of boats over the length of the lake. Get to the launch ramp early to head out for a morning fishing trip.

I followed that advice recently and headed out to Warm Creek to test fishing success. We trolled for Stripers but did not catch any. Then we switched to Bass lures. We caught two smallmouth Bass on shallow running crankbaits and saw lots of other Bass on big rocky structure. Our green plastic baits were ignored. We completed a short trip after another trolling excursion in the back of Warm Creek. The wake board boats joined us we called it a morning and headed in. Fishing success was not great in the southern lake. It is best to run uplake to catch more fish.

Later, mid lake was the better spot. Striper slurps randomly popped up in Bullfrog Bay, Moki Canyon, rincon, and mouth of the Escalante. Surface action was quick and not as dependable as it was last week.

Fishing success is still all about Bass. Ned rigs, double-tailed plastic grubs and green colored drop shot baits are still working well fished at 15-30 feet. Smallmouth Bass are caught more often than other species. There is an occasional surprise as the plastic bait is dropped to the bottom and picked up by a walleye. Or the bait is inhaled by a 3-pound Largemouth Bass.

Big bluegill may surprise you. Even a catfish may appear when it is least expected. Fishing at Lake Powell is worth it even when success is less than normal.

There is some light at the end of the striper tunnel. Adult Stripers are holding at 30-60 feet. Some are starting to respond to anchovy bait fished at about 20-40 feet at the usual canyon walls near the dam, Navajo Canyon and shady walls in Last Chance and Rock Creek. Bait fishing for Stripers will get better for about two to three more weeks and then collapse as Shad grow larger and boils start in July. It should be an awesome year for boils.

It will be interesting to see how many young Stripers grow up. Most adult Stripers spawned this year when normally only 50 percent or less of the adult population successfully spawn. Huge numbers of young Stripers are now in the lake and will become more obvious as they grow larger. The year 2020 will be remembered for many unusual events such as a pandemic, being self-quarantined, and maybe the biggest striper spawn in Lake Powell in this century.