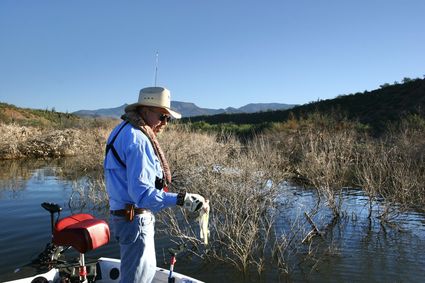 The key to enjoying a night fishing trip is organization. If you have all the equipment you need, and everything is kept where it should be, fishing in the dark is a real pleasure no matter what kind of fish you're after. Art Chamberlin has a lot of experience fishing at night, so he knows all the tricks that make night fishing fun and easy.

Black lights are a huge help when paired with fluorescent line at night. The black light makes the line glow, so you can see it jump or move when you get bit. They also light up the shore a bit so you aren't constantly casting up on the bank. Art likes Berkley Fireline.

Art's Tightliner Rig is a drop-shotting system that catches fish two ways. On the bottom, where the weight on a drop-shot rig normally goes, Art ties on a small pea head jig. If it's calm, he uses an 1/8-ounce pea head, and goes a little heavier if it's windy (but not more than a 1/4-ounce). A curly-tailed Power Worm goes on the pea head. He gets his pea heads poured on 3/0 hooks.

Years ago, Matt Shura told Art that he needed to get some motor oil worms. Art was doing well on them, and one night he had a client who wanted to keep some fish. The Bass were spitting up crawdads in the livewell, and the craws all had orange claws. Art's been dying his Power Bait tails orange ever since, and he's had very good results on them at night.

About two feet up from this motor oil/orange pea head contraption, Art ties on a #2 Owner mosquito hook and baits it with a straight-tailed drop shot worm. This Tightliner Rig has done incredibly well for him.

"Over a night I might catch twelve in a row on the bottom worm, then catch the next seven on the top one," Art says. "Over the years I've used this rig, I'd estimate I catch about 55% on the pea head, and the other 45% on the drop-shot worm."

Art favors sloping rocky banks for his night fishing, and he casts his rig up fairly close to shore and then fishes it very slowly down the bank. He just uses the reel handle to move the rig, and just gives it one or two cranks at a time. "Most of the problem with the general population is they fish too shallow and they fish too fast," Art declares. "They always think they have to be in there where they can read the shore."

Not so with Art. He knows that he'll catch most of his fish anywhere from twelve to thirty feet deep at night. Once his bait reaches bottom, he cranks twice to close the bail, then keeps it on the bottom and just lets it creep down the bank. Once he's got it back to the boat, he picks it up about 18 inches and lets it back down.

If the wind is really blowing hard Art will just drag his rig behind the boat because it is almost impossible to feel the rig or get it to the bottom in a gale. Even in a big wind he still never goes heavier than a quarter ounce. "Heavier weights create more hang-ups and just slow you down," he explains.

Eye On The Depthfinder

To make sure he's staying at the right depth and to watch for fish and structure, he keeps a sharp eye on the depthfinder at all times. He's got pliers, flashlight, and scissors (to cut Fireline) in a little organizer that is attached to his seat pole, and only the rods that are actually in use are out. All others are stowed out of the way.

Hands can get sweaty and/or greasy even at night, and Art has found that wrapping the rod handles in tennis racket wrap makes it a lot easier to hold on to them. Spinning gear has a tendency to get loopy line, especially at night. If that happens, he just loosens the drag a little bit and pulls the line out under pressure. This gets the loops out quickly, and works a lot better than opening the bail and letting loops of line out all over the deck.

One of the best things about braid, Art says, is the money it saves him. He now has to re-spool once a year instead of once a week, and he hardly loses any lures at all. One tip for braid: Art leaves about an inch of line out of the knot to allow for slippage. He says that a Palomar knot is okay, but his favorite knot for braid is called a Jansik. "I called it a Texas Eye-Crosser for years until I saw it in a magazine," he says. "They called it a Jansik."

Another tip that makes it easier to fish with braided line is to put a few feet of monofilament on the reel spool before you add the braid. Or you can use some cloth first aid tape. You just need something that will keep the braided line from slipping around the spool. If you neglect this, you'll feel like you're fishing with no drag set at all.

Where to fish? Art chooses steeper banks when the lake is low, and when the water is up he likes flats. He sits just off the flat over 20 - 28 feet of water, fishing the edge of the flat and the drop-off.Although the Tightliner Rig is his favorite, Art occasionally fishes jigs at night. "I like a half- or 3/8-ounce jig with a Berkley Power Spider," he says. He fishes these on the same places as the Tightliner Rigs, and works them every bit as slowly.

He also normally fishes topwater baits in the evening and in the morning if it's calm. If there is a bit of chop he'll use a crankbait instead. A Rattlin Chug Bug is his favorite Roosevelt topwater bait. He cranks it pretty steady and has dynamite results. His favorite crank? Norman's Baby N in Spring Crawdad.

You can fish minnows under a bobber to catch crappie, white Bass, and sunfish. If you're not keen on running around in the dark – don't. You can stay right around the launch area and catch fish, too. There's no reason why you should even have to fire up the big motor if you don't want to.

To be safe, make sure you wear your life jacket at all times at night. Use an insect repellent with DEET if gnats and mosquitos are bothersome, but be sure to wash it off your hands before you handle your baits. Fish don't like DEET, either.

There are lots of cool little gadgets available to make life easier for a night fisherman. You can get a rechargeable spotlight with a million candlepower, as well as a little LED light that clips to your hat brim to help you when it's time to re-tie. Stay organized, fish SLOW, and have a good time. Remember Art's three rules of fishing: 1. Have fun. 2. Learn something. 3. Catch Fish. All I would add is "Stay Safe".