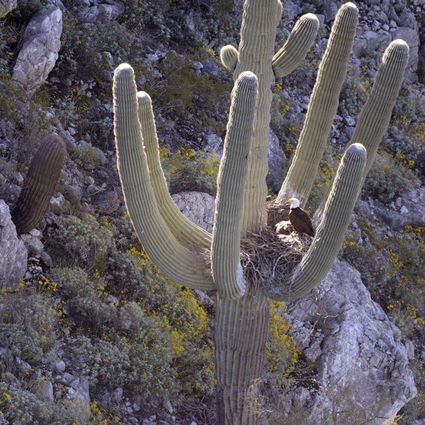 It has long been speculated that bald eagles could utilize saguaro cacti as nesting sites. Now the Arizona Game and Fish Department (AZGFD) has documented proof.

During recent eagle survey flights conducted by the department, officials were delighted to discover a pair of bald eagles with eaglets nesting in the arms of a large saguaro near a central Arizona reservoir.

According to Kenneth "Tuk" Jacobson, AZGFD's raptor management coordinator, biologists searched historical records in the 1970s for bald eagle nesting sites in Arizona. They discovered a 1937 record from Kermit Lee of Lee's Trading Post where there is mention of large nests in saguaros along the lower Verde River that were believed to be occupied by bald eagles. There was no documentation or photos to back up those sightings.

"It's been an 18-year trek for me, keeping my eye out for a bald eagle nest in a saguaro, so finally finding one is amazing," Jacobson said.