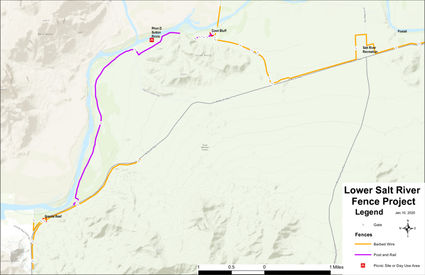 The Forest Service continues the fence project in the Lower Salt River area to comply with state agreement to help minimize horse-related accidents.

PHOENIX, January 11, 2020 - For Immediate Release. Tonto National Forest staff continue to oversee contracted installation of 14 miles of fence in the Lower Salt River area on the Mesa Ranger District as part of a joint effort to prevent horses from crossing Bush Highway, which endangers the animals and the public. The established fence line also will prevent adjacent livestock from joining the horse herd.

Installation of 4 miles of steel post and rail fence will begin Jan. 13 and continue thru February. Workers finished installing 10 miles of barbed wire fence on Jan. 10, completing a phase that began in November 2019.

Fence installation is among the Forest Service's duties and responsibilities under an Intergovernmental Agreement signed by the Office of the Arizona Attorney General.

The Tonto National Forest is working with the Arizona Department of Agriculture to create a plan to address issues related to the Salt River horse herd.

Forest and state officials said that previous fences were not preventing horses from getting onto Bush Highway. This resulted in the deaths of 20 or more horses annually.

"The situation was not safe for the horses or for motorists traveling on Bush Highway," said Matt Lane, Mesa District Ranger. "The barbed wire fence was constructed to comply with the state statute defining a lawful fence."

In addition to fencing, 35 gates were installed to accommodate users on designated trails and historically-used access points. Many gates are Americans with Disabilities Act-accessible, while others provide equestrian access. 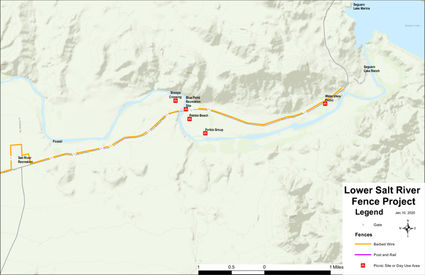 Recently, visitors to the forest in the Lower Salt River area have damaged and cut through sections of fence on the forest. Cutting fences creates unsafe conditions for both the public and horses. Destruction of government property on federal land is punishable as a Class B misdemeanor by a fine of up to $5,000 for an individual or $10,000 for an organization, imprisonment for not more than six months, or both. The amount of damage also could result in felony charges under U.S. Code (the codification, by subject matter, of the general and permanent laws of the United States) which could carry even more severe penalties.

Tonto officials ask the public to cease cutting fences and instead contact Lane at 480-610-3301 to discuss concerns.