Light Up Your Holidays With These Annual Favorites 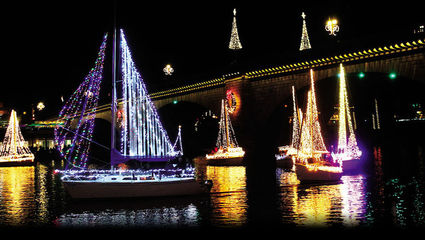 Editor's Note: Each year as Christmas approaches, three sparkling boat parades launch the holiday spirit. Although there are other wonderful and similar events throughout the Southwest, the following -- in chronological order -- have endured as favorites of our readers year after year.

Up to 50 boats brightly decorated in their holiday best will delight children and adults alike. Watch the boats cruise through the Bridgewater Channel beginning in Thompson Bay and continuing under the London Bridge to the north end of the Channel, with a turnaround at Windsor Beach and back. Bundle up and take a stroll through the Channel -- the only time you'll see the Channel packed full of boats and boaters in winter gear at night. Come cozy up with family and friends and create treasured memories of a favorite holiday tradition!

Theme: "Reflections on the Water"

When You Are There -

Bonfires will be permitted throughout the Channel on the island side beach areas but must be contained in a portable, self-contained fire pit. All ashes must be removed entirely and the area left clean. Absolutely no digging of fire pits in the sand and no dumping of ashes in the water. The area will be patrolled throughout the evening. (Bonfires are not permitted on the new white sand beaches at the north end of the channel.)

There will be great viewing at the Nautical Beachfront Resort (the starting point of the Parade of Lights), Rotary Beach, throughout the Channel on both sides between Rotary Beach and Windsor Beach, the English Village, across the London Bridge, and at any of the restaurants along the Channel.*

*If you plan on watching from the Channel restaurants, early reservations are recommended.

There is no charge to view The 37th Annual Boat Parade. Plenty of free parking is available at the English Village and in the parking areas on the island near the Channel. Plan to get there early as traffic around the London Bridge can become congested.

Event dates, times and/or details are subject to change.

Participants in this year's highly anticipated holiday boat parade will decorate their boats to fit this year's theme, which will be "Comic-Con on the Bay".

Presented by the Port of San Diego, the San Diego Bay Parade of Lights brings more than 100,000 San Diego residents and visitors to the shores of San Diego Bay each year. The procession of approximately 80 lavishly decorated boats has become one of the most iconic events in the region. There is no cost to view the parade.

This year, for the 4th time, the parade will proceed to the pier at Cesar Chavez Park before making the turn to Coronado, giving spectators another area to view the parade. The procession will start at 5:00 p.m. and will follow the predetermined parade route.

Whether a participant or spectator, the Parade of Lights is a festive and delightful experience for all!

Everyone loves a parade, right? A parade that floats - even better! Each year, we invite the community to take part in holiday cheer by gathering on the shores of Tempe Town Lake to watch a procession of festively decorated boats of all shapes and sizes. The 20th Annual Fantasy of Lights Boat Parade will be held on Saturday, Dec.14. 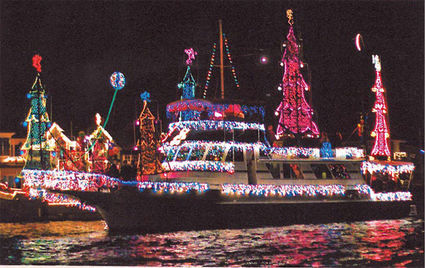 Light up the night and be dazzled by the Valley's most unique holiday event. While you are there, grab a bite from the on-site food vendors, get your holiday shopping done at the Holiday Market, take a selfie with Santa Claus, enjoy beer or wine while watching live entertainment and behold as the waters of Tempe Town Lake glisten from the crafted parade unit lights.

Bag checks will be conducted at all entrances this year. Clear bags are highly recommended. Please read all of our Event Rules before arriving.

Live entertainment will begin at 4 p.m. and the parade will kick off promptly at 7 p.m. Starting at Tempe Town Lake Marina, the U-shaped parade route travels west and turns right at the light rail bridge, where they begin to make their way back east on Tempe Town Lake along the north shore. To get to the parade, check out Tempe Beach Park's location, know where to park or explore public transit options.