SOS: Recreational Boat Is Stuck - In A Cave? 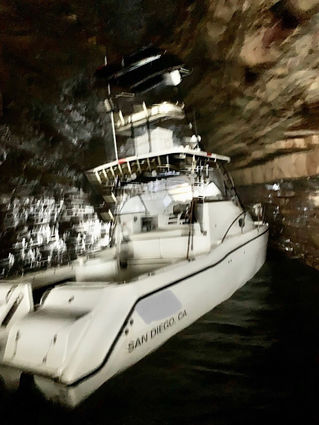 WHOOPS! -- A recreational fishing boat accidentally ends up deep inside a Southern California cave and provides a lesson or two for all boat owners.

"There are not many times I can say it after 30 years as a towboat captain, but this was a first," says Capt. Rob Butler, owner of the TowBoatUS San Diego. Butler was describing his company's recent response to a 26-foot power boat stuck inside a deep sandstone cave along a southern California cliff wall. Butler's company is one of more than 300 locations across the nation that responds to over 70,000 requests annually for on-water assistance and provide boat salvage services. This job, however, was one in a million.

The story begins with two men fishing 30 miles offshore. Heading back on calm seas at night under a bright moon, the owner went below to get some sleep while his crewmate put the boat on autopilot for San Diego's Shelter Island Boat Launch. Then he fell asleep. The men were awakened by the sound of surf as their boat cruised into the 15-foot-high cave, literally threading the needle.

"If they missed by 10 feet on either side, it could have been fatal," Butler says. "It's really a 'Twilight Zone' type of situation, if you think about it."

Thankfully, the anglers had enough VHF radio signal from inside the cave to hail the Coast Guard, which triggered responses from the San Diego Lifeguard Service, U.S. Customs and Border Protection (CBP) and TowBoatUS San Diego.

It was CBP's infrared camera that detected heat 200 feet inside the cave. Lifeguards went in and swam the men out to safety, but an offshore storm was kicking up big surf, making the boat's salvage unsafe. The Pacific Ocean then pulverized the fiberglass boat in what amounted to a jagged-edged trash compactor.

Butler's crew later spent several days shuttling out the debris on a 20-foot aluminum canoe, including the boat's chewed-up twin sterndrive engines. "Our last large item to remove was a ball of debris tangled with anchor chain, fishing gear, sea anchor and one of the outdrives, all twisted into a large part of the boat's tuna tower," Butler says, before offering this advice to all those traveling offshore: "Although autopilots make boating easier, it is very important there is always someone on wheel watch. A good rule of thumb is to set a destination point 3 miles out from shore and hand steer into the harbor. You can also install a watch alarm that will deter whoever is on watch from falling asleep."