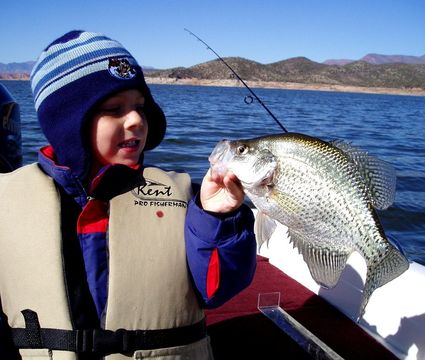 Cool days mean great crappie fishing, and nobody knows Roosevelt crappie better that Curt Rambo, Leroy Price, and Art Chamberlin. Curt is a jig guy and Art and Leroy like to troll. Here's how they do it.

"I drive around and look for brush in twenty to thirty feet of water," Rambo explains. "Sometimes it takes an hour to find a good spot, and sometimes you don't find one all day."

Just about any cove with submerged brush can be good.

Drop A Jig Down There

Look for brush in ten to thirty feet of water, and even if you don't see fish on the graph, drop a jig down there anyway. Often the crappie are buried so deep in the tree that you can't tell they are there by looking at the depthfinder. "There might be twenty bushes in there, and only one will have fish on it," he says. You need to be persistent.

Rambo may visit ten or more places a day, and not all of them will produce on any given day. Until a few weeks ago he was fishing Berkley Power Grubs, but in the cooler fall weather a Creme Lit'l Fishie on an 1/8-ounce jig is his favorite. He gets right over the fish and drops the lure to the bottom, then puts the rod tip on the water's surface and reels the line taut. Three to five more cranks, and then he begins to raise and lower the rod, watching the line and feeling for a bite.

"If you can see the fish down there and you're not getting bit you're probably too shallow," Curt says. Just give the reel a couple more cranks and keep trying.

While Curt is jigging for crappie, guides like Art Chamberlin and Leroy Price are trolling. In October, Leroy starts trolling in the Tonto end, out toward the middle. "I might be over forty, fifty, or even sixty feet of water," Leroy explains, "but the fish are still only about twenty to twenty-five feet deep."

It's always better to keep your lures above crappie, since they feed up. Leroy keeps his lures running at about ten to twelve feet deep. He uses two 1/16-ounce jigs on each rod, tied from eighteen inches to two feet apart. On the top jigs are 2-inch John Deere Kalin grubs (green and yellow), and on the bottom hooks he'll run a black, blue, and chartreuse grub. Leroy rigs the grubs so that the curve of the tail is opposite the curve of the hook. It gives them a whole lot more action in the water.

Leroy keeps thing pretty simple. No line counters, no fancy rods and reels. He lets out about thirty feet or so of line, and runs the boat at .8 to .9 miles per hour. He does use a GPS unit to track his speed, since it's so crucial to getting bit.

"Kids and crappie are the perfect combination," Leroy says. "Crappie give you enough fight to be fun, and the action is usually constant enough to keep kids happy." Kids who won't sit still for trolling might be happier jigging for crappie. Either way, now is a good time to head to Roosevelt and give it a try. Once you find them, it's usually pretty easy to catch enough for supper.

"One of the advantages of trolling for crappie is that you are fishing while you are searching," says guide Art Chamberlin. He motors to a likely area and sets out four rods, each with braided line. He uses a waterproof marker to make a single mark (he marks about six inches of the line) at 30 feet, two marks at 42 feet, and three marks at 54 feet.

At a speed of one mile per hour, (which he considers optimum for trolling) a 1/8-ounce jig will be running 12 to 13 feet deep if the double marks on the line are at the rod tip. If he lets out line until the triple mark is at the tip, he knows his lures are at around 15 or 16 feet.

Like Rambo, Chamberlin uses a lot of chartreuse Power Grubs. He rigs two jigs on each line, spaced about two feet apart, and on two rods he often runs small crankbaits. He'll often start out trolling with two rods at one depth and two at another, which lets him cover a lot of territory until he discovers what the perfect depth is that day. Regardless of the depth of the water he is fishing, he generally keeps the jigs running between twelve and fifteen feet deep.

Art's GPS is an invaluable trolling tool. The GPS tells him how fast he is going at all times, and this has been a huge help, especially on windy days. In addition to keeping his speed correct, the GPS allows him to return to any schools of fish he has passed over. He keeps the GPS mounted right next to his depthfinder and watches both constantly. When he sees fish on the graph he knows he has about thirty seconds before the jigs are into them, and once he's out of the school he can turn around and get right back on them by watching the screen on the GPS.

You need a valid Arizona Fishing License to fish for crappie. Buy one at any sporting goods store or tackle shop, or at any Game and Fish office. You can also purchase and print a license online at http://www.azgfd.com. 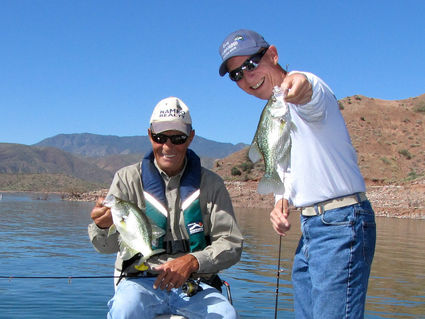 Crappie limits vary by body of water. On Roosevelt, the limit is 15 crappie per day. If you are fishing somewhere else, pick up a copy of the 2019-2020 fishing regulations or download them at http://www.azgfd.com.

Curt admits that during December and January the trollers have better luck than he does. During the spawn the crappie are up shallow and casting a tiny jig to shore is the way to go. The rest of the time, Curt prefers vertical jigging.

Crappie tackle can be pretty simple. Braided line will help you get your lure back when you get snagged in brush. Curt uses 8-pound-test Power Pro. You'll also need 1/8-ounce jigs and a selection of grubs or other little soft plastic crappie lures. Some anglers like to use minnows. An inexpensive light spinning rod outfit is dandy for crappie.