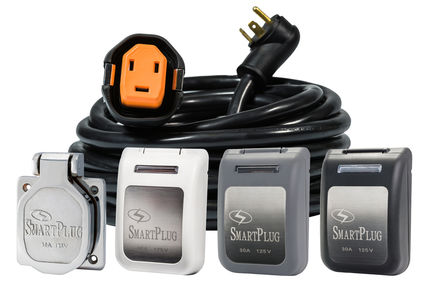 Few people underestimate the dangers of an incorrectly wired home electrical system, yet RV owners routinely tolerate problems that would raise red flags if they happened at home. From seeing heat-browning and melted plastic around the shore power connection to a light "zap" when touching the RV, warning signs that something is wrong should be taken seriously before someone is injured or something catastrophic happens. SmartPlug Systems, pioneer in RV shore power safety, takes a close look at altogether too common problems plaguing RVers and offers tips on how to prevent them.

AC current from the campsite's shore power pedestal flows through the shore power cable and into the RV through the inlet. If the plug or cordset have been compromised-such as by pitting, corrosion or physical damage-it creates resistance. This is the primary pitfall of traditional twist-type connectors with thin metal blades. The situation is somewhat like a slow-moving river that suddenly has to squeeze through a small hole: an enormous amount of pressure is exerted. The result for the plug is massive heat generation that can build to the point of starting a fire. A brown singe in the plastic insulation around the connection is a telltale warning that this is happening.

The innovative SmartPlug was developed specifically to counter the drawbacks of traditional shore power equipment. Available in 15, 30, 32 and 50 amp configurations, it uses a pin and clip design that plugs straight in to avoid damaging internal components and provides 20 times the metal-to-metal connection over twist-type connectors to ensure maximum electrical transfer. Because of its unique asymmetrical shape and multi-point locking system, there's no aligning the L-shaped blade or fumbling trying to get the sealing ring to thread.

"I recommend the SmartPlug without reservation," said Mike Sokol, noted expert on RV electrical safety and author of No~Shock~Zone RV Electrical Safety. "It's by far the easiest plug to use and certainly the safest."

The adage "water and electricity don't mix" is more than applicable to a campground that's exposed to the elements. When plugging in, first switch off the power pedestal's breaker and avoid standing in water or on wet ground. And while it's difficult to do with a twist-type connection, only use one hand to make the connection. This avoids having one's body become part of an electrical fault, where the current path would be up one arm, through the heart and down the other arm or legs to complete the circuit.

Like a home, RVs rely on the EGC (equipment grounding conductor) for electrical safety, which is typically known as the ground wire. If there's a break in the RV insulation resulting in contact with any metal, a fault current should be created which will trip the circuit breaker. However, if the EGC connection fails due to corrosion or a loose connection in the plug, it can manifest itself as what many may assume is static electricity or even an arm-numbing shock. Both scenarios should be taken seriously and addressed immediately since a heart can be stopped by less current than it takes to power a small nightlight bulb.

Plugging an inexpensive, commonly available three-light outlet tester into each outlet in the RV will identify problems. They typically have three colored lamps and a chart that, depending on the sequence, will display open ground, open neutral, open hot, reversed hot/ground, reversed hot/neutral and correct wiring. If the problem began after a piece of equipment was added, it may be easy to correct. Otherwise, a trained RV technician should be consulted.

"Just like in a home, there are DIY jobs the average RV owner can easily undertake and then there are those that require specialized training," continued Sokol. "Bringing in a qualified technician to troubleshoot and correct an electrical problem will not only save a lot of time but could also prevent someone from being injured." Sokol's websites are http://www.rvtravel.com, http://www.rvelectricity.com and http://www.noshockzone.org.