A Portion Of Centennial Trail 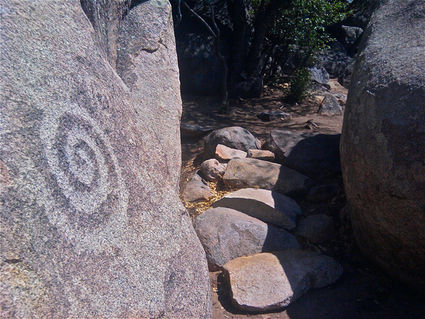 Due to new development in the area, about a third of Centennial Trail - an in-town trail that meanders through the boulders and canyons, with panoramic views of the city of prescott, Rodeo Grounds, Thumb Butte, and Granite Mountain, and Petroglyphs - was closed in November 2018. The closure was located in the middle third of the trail near the Kile Street trailhead and was due to blasting and deep trenching for a new sewer line. Because of the blasting, a portion of the trail needed to be slightly rerouted.

On Monday, May 13, 2019, Over the Hill Gang finished working on the trail by re-routing the portion affected by the blasting and doing some final maintenance. The trail and Kile Street trailhead are once again open to the public. Originally opened in 2012, Centennial Trail celebrates Arizona's 100th year of statehood. The trail was made possible after an open space land purchase of 30 acres in the fall of 2011.

An in-town trail, the southeast end of Centennial offers hikers sweeping views of the city including the Rodeo Grounds, Thumb Butte, and Granite Mountain. Although in-town, the trail is tranquil and meanders through shrub oak, pine trees, boulders, and canyons. Petroglyphs can be spotted on some of the boulders. Popular among Prescott Area and neighborhood residents, the trail is at times challenging and rated at a level 2.5 (on a scale of one to four).

Parking is off Kile Street near Iron Springs Road, with a two-mile, out-and-back in either direction.