'Lake Powell Is Amazing! I Am Glad To Be Back.' 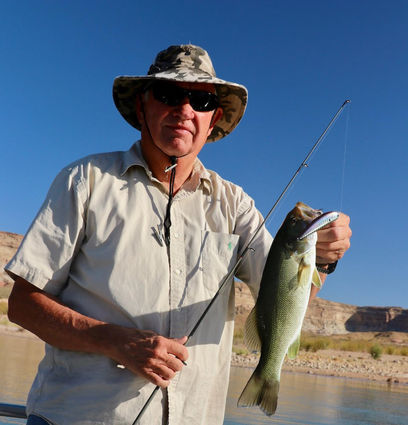 Dana Andrus, Page Ariz, is shown with a smallmouth bass caught on topwater near a striper boil.

As I returned from vacation, we had an assignment to catch 60 striped bass for the annual disease re-certification, to ensure that Lake Powell fish do not have any viruses that might destabilize the fishery. We must collect the fish on the same day that they are certified. Hot weather had really slowed down fishing in August, but I checked recent fish reports and found that small stripers (8-12 inches) recently boiled in Warm Creek. We targeted and caught the needed 60 fish in 4 hours. Here is the technique that will work lakewide.

First, start early. We launched while the clear sky was still red, well before the sun rose in the east. Next, look for small splashes. Stripers are actively chasing shad, but it is hard to tell a few stripers apart from gizzard shad that are active on the surface each morning. The clue is to find 3 or more fish working together, rather than one single fish jumping.

When a few fish are surfacing, that might be stripers, start trolling in that area. The best lures are small rattletraps or other shallow runners. It is likely that a few stripers will attack your trolled lure while scanning the surface for a larger boil. We caught about 15 fish trolling while watching for boils.

Boils are not large and happen quickly in the warm surface water. We saw the most boils as the sun came over the ridges and lit up the water. When 15-20 stripers come up, race toward them as quickly as possible and stop just in casting range. Use surface lures, or the same trolling rattletraps, or spoons. Surface lures placed right over the boiling fish work well. The cast has to be within a foot of the splash ring. We caught as many fish on crankbaits and spoons reeled though the boil zone.

Most of the stripers were yearlings that can stay in warm water for a long time. Larger stripers have to live in deeper, cool water. They can boil for a few minutes, then must dive back to their cool comfort zone. We saw two groups of large stripers on the surface. We did catch 2-3 pound stripers on the surface and were amazed at their healthy bodies. These fish were FAT! We caught 15 fish that were boiling. 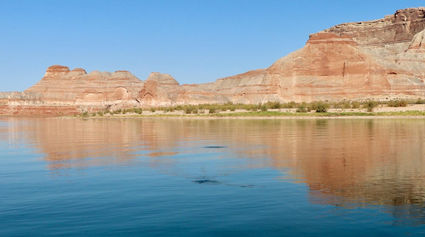 The other 30 fish were easy to catch. Right after the boil quit, the fish dove to cooler water at 20-60 feet. They were still hungry but they had to cool off. When the graph shows a school of stripers swimming under the boat, drop spoons to the bottom and stripers will be happy to eat these "shad" swimming through the hungry striper school.

The most effective striper technique now is to use the trifecta of trolling, casting to boils and then spooning on the bottom. Have 3 rods rigged with top water, shallow running cranks and spoons to drop to the bottom. There is not time to retie lures while this action is spinning in front of you. I often used all 3 techniques within a 5-minute period while fish moved from the surface to the bottom.

We also found large smallmouth bass hanging out near shad schools. We caught them trolling, casting, and spooning.