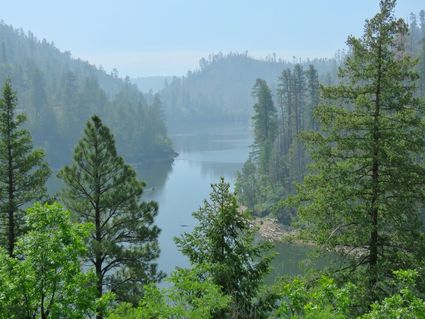 Blue Ridge Reservoir: The haze is due to smoke from forest fires that were controlled but still smoldering in places.

This Is A Seriously Fun Trip

Living in Phoenix means that it is too darn hot to ride around in the desert in the summer, at least for me – and I'm a native. So when the temperatures get into the hundreds, we take to the hills like a lot of folks in Arizona. A couple of weeks ago we took what we call a "truck trip" – that means a road trip that doesn't require the side by side, so if it involves dirt roads, they are usually pretty tame. This trip was one I really enjoyed because we saw a lot of creeks, two springs, and four lakes, plus incredible views from the Mogollon Rim.

We started out on I-17 and got off on the General Crook Trail (Hwy 260) near Camp Verde. In case you ever wondered, General Crook had the trail built so he could move supplies and it was being used by pack trains in 1873. It was about 200 miles long, and what's left of it is near Highway 260. FR 300 on The Rim also roughly follows it, and if you look for them, you can see metal chevrons that were nailed to trees by the Forest Service and the Boy Scouts to mark the trail.

Anyway, the first stop we made was at White Bridge day use area. This is a popular spot for kayakers to put in on the Verde, and I wanted to see how it had survived the floods. It looked great. White Bridge has restrooms and a handful of picnic tables, so it's a great place to stop and have a snack. There's no drinking water and no garbage service, though, so plan accordingly. The river is beautiful here and it's nice and shady down by the water. There's a very good concrete path down to the bridge (it's not the original White Bridge; that's gone).

We continued on up 260 until we reached Highway 87. Along the road here, the fires had just been put out, and there was a lot of smoke still rising from the ashes. In places, there were trees still smoldering and occasionally small flames shot out of them. There were fire fighters all over, putting out the hot spots. We talked to some of them at the Long Valley/Clint's Well store where we stopped for gas. They said the fires were under control.

Our next stop was Blue Ridge Reservoir. To get there, you turn on FR751 off Highway 87 past Clint's Well. It's a gravel road for about six miles, and the lake itself is narrow and has a lot of twists and turns so you only see parts of it at a time. The day we were there the smoke from the fires made it very hazy and dream-like. The shoreline is steep and rocky, so most of it is only accessible by boat, but there is a new ramp there that is very nice.

I suggest you drive clear to the end of the road and walk down to where you can see the spillway – it looks really cool. There's a nice little clearing down there that makes a great place for the kids and the dog to play. After leaving the lake, we also drove through the campground, which is further down 87 and it was very nice.

We left Highway 87 a short way past Blue Ridge Campground, taking FR95 south. This is where the pavement ends and you're on dirt from now until you pass Woods Canyon Lake. We stayed on 95 until we reached FR96 where 95 crosses East Clear Creek. From this point, 95 was closed because of the fires. We hopped out here at the crossroads. There is a lot of parking places here for fishermen. We investigated Barbershop Canyon, which had another creek flowing into East Clear Creek, then walked down Clear Creek for a way too. It's beautiful here and would be a great place to fish or play in the water.

When we left there, we continued on 96 until we came to FR321. We were enjoying the drive when I noticed that there was a spring nearby, called Dane Spring. I'm always up for a spring so we turned down a side road, which I believe is FR321A. At any rate, it is at these coordinates: 34.46240 degrees N 111.14252 degrees west. A little way down the road there is a rail fence on the left that seems to mark off a parking area, then an opening in the barbed wire fence a little way behind it. It looks like this used to be road as well, but they fenced it and now it's a trail.

We walked down the trail for maybe a quarter of a mile, and it intersected a trail that was running perpendicular to it. Off to the right we could see the ruins of an old cabin, which was right next to the spring. It was very pretty in there. Exploring around, we also found a cross near the stream. Two hikers came down the trail and they told us that Dane Spring and the cabin were on a 24-mile loop trail called the Cabin Loop Trail, which features five cabins. Put that on your to-do list. I read about it, and most people take 3 days and 2 nights to backpack the trail.

We left Dane Spring and got back on 321, and I soon saw another spring on the map. On my map (Topo Maps App), it is the very next road after Dane Spring turnoff on 321. We drove down this road headed west northwest, and after about 2000 yards there was a big metal gate closing off the road. We parked and decided to hoof it to the spring. The road took us out to where yet another hiking trail intersected, and following my app, we took a left onto the trail and soon saw the spring – a very pretty little pool surrounded by lush green grass. It was a very short and easy hike, great for letting the kids burn off some steam. Plus, it's just flat pretty out there, and at 7500 feet, it's nice and cool.

Once we left Coyote Spring, we continued south on FR321 until we got to FR300, The Rim Road, where we turned east toward Knoll Lake. This lake gets its name from a little island that is in the middle of it. It's around 75 acres and 50 feet deep and attracts a lot of fishermen. You can take a boat on the water but you can only use a single electric motor.

There's a nice little ramp near the dam, and we walked out over the dam to get a better view of the lake. From there you can see down below the dam to the stream and it's beautiful down there. From the dam we watched an osprey swoop down and snatch a trout out of the lake. There are vault toilets, a campground, and picnic tables at Knoll Lake, and it's a fee area. What a beautiful lake!

All along The Rim Road there are opportunities for spectacular views because the road is very close to the edge. Because of recent and past fires, the view is not obstructed by trees in many areas. Lots and lots of hiking trails intersect the road as well. We followed The Rim road until we came to the turn-off for Bear Canyon Lake. This lake has steep shorelines too, but not as high as Blue Ridge. However, there is no ramp and no motor vehicle access to the shore, so if you want to use a little boat, single electric engine, you'll have to carry it down the path to the lake. I can't imagine doing that.

There is no campground, but we saw people camped along the road on the way in. At one point, a "no camping beyond this point" sign ends that. There are vault toilets but no water or any other services. You can also get to Bear Canyon Lake off FR89A, but you would still have a little way to carry your boat. Friends tell me they carry kayaks down there. It's a gorgeous lake, and the restrictions are what keeps it nice, no doubt.

Our last stop was Woods Canyon Lake, and just before we reached the turn-off, the pavement began. Because the road in from the east is paved, Woods Canyon Lake is very developed compared to the other lakes. There is a store, boat rentals, campgrounds, toilets, and trash service. The Rim Lakes Vista Trail is less than a mile from the campground and lets you get spectacular views from The Rim. Fees vary and there are lots of campsites, including group use. 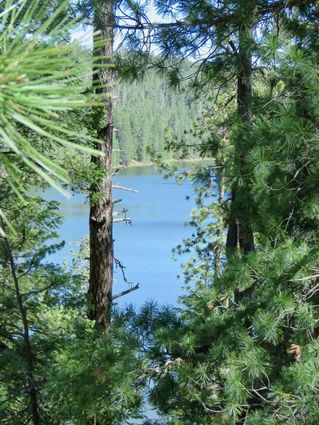 Bear Canyon Lake:There is a bit of a steep hike to the shore.

After Woods Canyon Lake, it isn't far to Highway 260, where we turned west and headed back home via Payson. Payson is the perfect place to stop for dinner. We had Mochi with us, our French Brittany who is now just over a year old, so we stopped at Subway and got sandwiches which we took to Green Valley Park to eat.

If you haven't been to Green Valley Park in Payson, you should go. It's gorgeous, with tons of green grass, sidewalks, picnic tables, Zane Grey's cabin, ponds to fish – you name it. At sunset, it is incredibly beautiful. We saw elk droppings in the grass, so you might even see some elk around dusk or dawn.

Altogether, this was a wonderful trip. We left our house at around 6 a.m. and got home a little after 8 p.m. If you didn't do all the hikes we did, it would be shorter. Seriously a fun trip.