Life Is Good At Lake Powell! 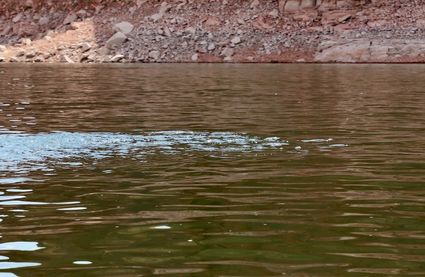 We went to Bullfrog recently to complete a work assignment, which was to collect 200 surface-feeding striped Bass. These captured fish are destined to be brood fish used to create hybrid Stripers. We chose the date months ago, based on previous fish reports, which indicated slurping Stripers would begin feeding on the surface during the first week of June. The report strategy worked great as we caught 100 surface-feeding (slurping) Stripers from dawn until 10 a.m. on Monday and Tuesday.

Stripers find small schools of Shad (less than inch long) on the surface in areas where gizzard shad spawn. These small Shad, bunch up, are surrounded and attacked by hungry Stripers. The event is named "slurps" because tiny Shad cannot swim fast enough to elude the attacking fish.

Schooling Stripers surround the Shad school and leisurely Gulp down as many Shad as possible. Anglers observing the Shad feast only see a small surface disturbance and an occasional fish head skimming the surface.

An Exciting Way To Catch Stripers

Binging Stripers are prone to eat something larger than a tiny Shad. If a "large Shad" swims by (small rattletrap, spoon, or surface lure), the closest striper can be distracted and hit your lure. The trick is to cast just beyond the feeding school and reel the lure back through the skirmish line. Usually only one fish is caught from a slurp. Two fish is a bonus. That is not a problem because the Stripers go down, regroup and come right back up under another Shad school.

On our trip, the wait was often less than a minute with the striper school coming up again, not very far away. We ran the big motor close enough to the slurp to get off another cast and catch another fish. This is an exciting way to catch Stripers. Surprisingly the little foreheads seen sticking out of the water belonged to very healthy 2-3 pound Stripers.

Where The Slurps Are

Slurps were found uplake as far as Moki Canyon. We did not go uplake further due to a heavy mudline with lots of floating debris. There were slurps in the main channel all day long from Moki Canyon to Rock Creek. The heaviest concentration of slurping fish were found from Annies Canyon to rincon where another water color change occurred from murky to clear. The next giant concentration of Stripers was at the mouth of the San Juan. Slurping schools were seen as far downlake as Rock Creek, Dove Canyon, and Dominguez Butte (floating restroom).

Smallmouth bass fishing is still slower than usual with smallmouth holding on rocky habitat that, at press time, was over 20 feet deep. Largemouth Bass are doing fine hiding in the newly submerged tumbleweeds in the backs if canyons and coves. Walleye are deeper than usual because of the fast-rising water levels, but are still caught trolling.

The good news is that the Castle Rock Cut is almost 10 feet deep (at press time). Antelope Point public launch ramp will be open soon, The inflowing river water exceeds 134,000 acre feet. Perhaps the best news for anglers is that the Wahweap Fish Cleaning Station is now open.