BoatUS Says Be Careful When Repowering 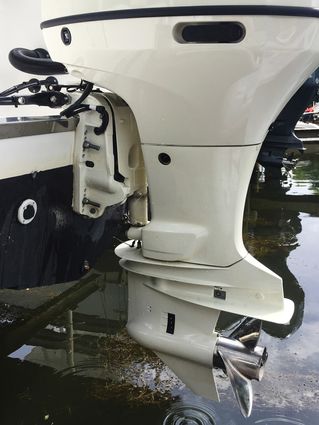 BEWARE -- BoatUS urges boaters to be aware of engine weight when repowering a recreational boat.

BoatUS urges boaters to be aware of engine weight when repowering a recreational boat.

Boaters Aren't the Only Ones Getting Heavier; Outboard Engines Catch Up

One year ago the U.S. Coast Guard required new recreational boats to have more floatation to support the increased weight of newer four-stroke outboards if the boat becomes swamped. Now the agency is implementing those changes as reported in the Spring 2019 issue of the U.S. Coast Guard boating safety Circular. Boat Owners Association of The United States (BoatUS) advises recreational boaters to be aware of this issue when considering repowering an older model year vessel with a heavier four-stroke outboard.

"Repowering with a newer, more reliable, cleaner, fuel-sipping outboard is one way to get more life out of a good boat," said BoatUS Foundation president Chris Edmonston. "However, after having gone through the recent repowering of a 22-foot center-console vessel with a heavier four-stroke, and seeing first-hand the resulting loss of freeboard and performance, we want to remind owners to consider engine weight. With a potentially heavier four-stroke motor and resulting lower freeboard at the stern, swamping is a concern and your boat may handle differently than with the old engine."

If you don't know the weight of the engine you're replacing, Edmonston recommends you contact the manufacturer before you repower. A boat dealer or repair facility may also be able to provide that information to ensure that, regardless of horsepower, the engine weights are similar.

Federal requirements mandate that outboard-powered monohull boats 20-feet and under must be built with enough flotation to keep the passenger-carrying area at or just below the water's surface in the event of swamping or capsizing. The boat must float level. There are no floatation regulations for vessels over 20-feet long.

When these regulations were written in the early 1970s, virtually all outboards suitable for smaller boats were two-stroke models covering a broad range of horsepower, but that's no longer the case. Four-strokes come in virtually every size now, making them viable candidates for installation on more boats.

While recently there have been some two- and four-stroke models with comparable power and weight, by and large four-stroke outboard engines remain heavier. A four-stroke's more complex valve systems typically add 10 percent to 15 percent or more weight than their two-stroke counterparts. Twin engine installations compound the weight problem.

This isn't the first time the Coast Guard has recognized a growing vessel weight issue and updated regulations. In 2011, the "Assumed Average Weight Per Person" was increased from 140 to 185 pounds., but only for commercial passenger vessels. Existing formulas for weight capacity on recreational boats were considered adequate and did not change.