Always A Crowd-Pleasing Favorite Is Jousting 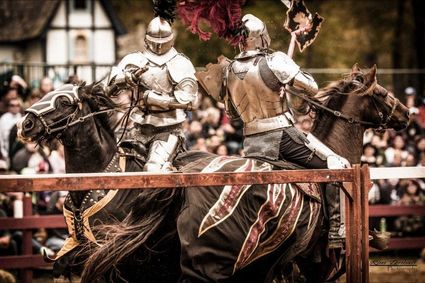 Photos and text courtesy of the Arizona Renaissance Festival

Be transported back to the 16th century as one of the largest and most picturesque Renaissance Festivals in the nation prepares for raucous revelry below the foothills of the Superstition Mountains. A cast of nearly 2,000 costumed characters roam the streets among more than 200 artisans, crafters and food vendors. Artisans are housed in the market lanes filled with storybook shops and medieval tents.

The 2019 Arizona Renaissance Festival is held from February 9 through March 31, every Saturday and Sunday and Presidents' Day, February 18, Festival hours are 10:00 a.m. until 6:00 p.m., rain or shine.

So Much To See And Do

The AZ Renaissance Festival has 14 stages of continuous, live entertainment, each packed with a unique mix of comedy, music and antics throughout the 30-acre village marketplace. There is also an Outdoor Circus, a Medieval Arts & Crafts Fair and a Jousting Tournament with three performances each day.

One of the most popular events each year is the Jousting Tournament. This "sport" has a fascinating history.

The History Of Jousting

The origins of jousting are believed to be in classical Rome, but the "sport" rose to its greatest popularity in Europe by the 1400s. It all evolved from mock battles in which knights on horseback, assisted by foot soldiers, formed into teams and charged at each other in some wide meadow.

The result was a "melee" (the word hasn't changed in a millennium) of shattered lances, clanging swords, flailing arms and legs - astride and afoot - that went on all day and into the night. The earliest recorded melee was in 1066 A.D., though mock combat had probably been around for at least a century by then.

At first, the battles served more to hone fighting skills than to provide popular diversion. But in peaceful times, a knight needed a way to retain his skills. The jousts were great money-makers for the victors; instead of claiming mere points, the winning team held the losers for ransom, often accepting their horses and armor as payment.

The many deaths which resulted from such "sport" led popes and English kings to ban jousting tournaments, though English subjects often persisted and were repeatedly excommunicated. The tournaments had become a featured attraction at any kind of market faire or other significant gathering.

At the height of their popularity, jousts rivaled a state fair, Super Bowl, rock concert and Octoberfest all rolled into one.

By the middle 1200s, the joust emerged as the favored way to prove which of two (or more) knights was better. Most contests were a "Joust a Plaisir" (for pleasure) in which a winner was declared on the basis of points scored, though some were still conducted "a l'Outrance" (to the death).

In the sporting version, the knights' swords were dulled and their lances tipped with "coronals" (little crowns) to prevent their penetrating a joint in the armor. Some authorities believe that the lances were deliberately weakened, a precaution still in effect today.

Annually, jousting is celebrated with daily tournaments at the Arizona Renaissance Festival.

The training of a knight included spearing a small ring, some on stanchions and some tossed in the air, and quintain jousting. (Ring jousting is today the state sport in Maryland.)

In quintain jousting, the knight tilted with a mock opponent that sat on a revolving pedestal. If he was inaccurate or too slow, the jouster might get whacked by the sand bag on the other end of the contraption.

These quintain devices are thought to be the precursors of Victorian carrousels. Many turn-of-the-century carrousels had a variety of things to grab, including a brass ring which entitled the bearer to a free ride.

The joust became very civilized and formalized, though severe injuries were common. According to the chronicler of an English tournament in 1256, many of the noble contestants "Never afterward recovered their health." 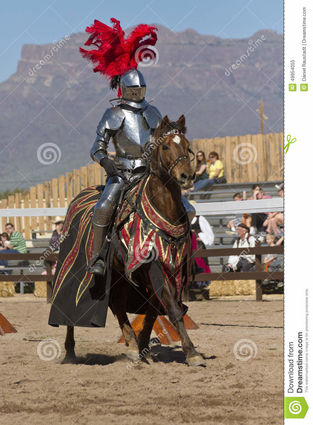 England's King Edward lll put a temporary public ban on jousting in 1370 but an intrepid troupe of stunt riders and actors brought it back in the 1980s. Clad in authentic-looking breastplates and helmets, wielding heavy lances, maces and blunted swords, they will thrill the throngs at the Arizona Renaissance Festival.

Some fakery, as in professional wrestling, is to be expected. Victor and vanquished are usually agreed to beforehand. As in many Medieval tournaments, even the exact number of blows is often settled.

Modern re-creations of Renaissance-era jousting tournaments are depictions of historical events, coming from a time of high ideals, noble causes and grand chivalry.