"Quality of life is measured by amount of time spent fishing." 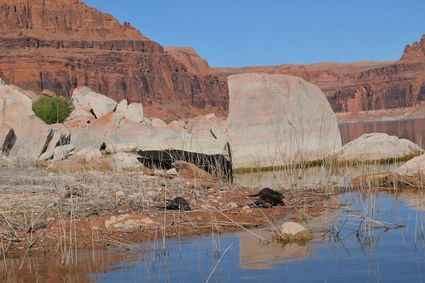 We have finished fishing with gill nets at Good Hope Bay and rincon. Therefore, this will be the last regular weekly report for 2018. Each year we do gill net studies to document changes in fish populations, health indexes, and to help us understand how the fishery is doing compared to previous years. The gill netting sites included Wahweap, San Juan (Piute), rincon and Good Hope Bay (Red Canyon). Gill-netting data dates back to 1973 so there is a long history of netting data for comparison.

When we placed nets in the San Juan from Piute Canyon toward the Great Bend we found that the most numerous fish species collected were gizzard shad (from 4 to 20 inches) and striped Bass. Smallmouth Bass numbers were below average but that may have more to do with the stormy weather or changing habitat encountered. Results from the other three stations will help us understand that more fully.

We did have some volunteers show up to help us pick fish out of a couple of nets.

We politely told the two otters to leave the fish in the nets and to stop eating the tails off the smallmouth Bass which seemed to be their preferred fish. They looked quizzically at us and then went on their way to a new spot.

After the netting was completed, we went fishing along the large wall on the right side before entering the Great Bend. We caught a couple of Stripers trolling and a few more on spoons but catching was not fast enough. We went up the Great Bend and saw two fishing boats with anglers willing to give us fish reports. The first report indicated good smallmouth fishing along the canyon walls.

The second report of a striper boil caused us to turn around and head back DOWNSTREAM to where the water depth in the Great Bend was 30-40 feet. Stripers were not boiling on the sunny side of the channel where they had been reported in the morning but we saw splashes in the shade of the afternoon sun.

We chased splashes and caught 20 Stripers on surface lures, crank baits and spoons. They moved quickly over a half mile area but each time we saw a splash we caught a few more fish. It was a great way to finish our last trip to the San Juan this year.

Reports from Good Hope Bay indicated slow fishing, which improved with distance traveled upstream. The mudline near Trachyte produced Stripers caught trolling and spooning with the best habitat being quick drop-offs where the depth quickly changed from 10 to 25 feet. The best trolling lures were purple Flicker Shad and Rattletraps and a black-backed jointed Rapala.

For now, the best option is to target the 30-40 foot depth strata when looking for Stripers near the back of a canyon. Trolling is the best way to find fish now, but as the water cools, Stripers will seek deeper water and spooning will be the best technique.