Travel back in time to the 16th century at the Arizona Renaissance Festival. 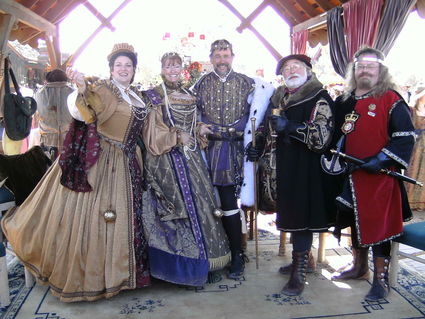 The AZ Renaissance Festival has 14 stages of continuous, live entertainment, each packed with a unique mix of comedy, music and antics throughout the 30-acre village marketplace. There is also an Outdoor Circus, a Medieval Arts & Crafts Fair and a Jousting Tournament with three performances each day.

Be transported back to the 16th century as one of the largest and most picturesque Renaissance Festivals in the nation prepares for raucous revelry below the foothills of the Superstition Mountains. Get a map and directions to the festival grounds.

A cast of nearly 2,000 costumed characters roam the streets among more than 200 artisans, crafters and food vendors. Artisans are housed in the market lanes filled with storybook shops and medieval tents.

Stroll through the Renaissance grounds and relive history

Mythic heroes slaying dragons, steel clad warriors jousting atop mighty steeds and knights in shining armor saving damsels in distress...this can all be found at the Arizona Renaissance Festival.

There is definitely something for the children and the kid in all of us to be found at the faire; experience your best day out in history!

Arizona's annual festival is one of the largest in the nation, held on weekends in February and March in its fanciful European style village constructed on a 30-acre site just below the foothills of the Superstition Mountains, east of Phoenix.

This is where you'll find theater, circus, an arts and crafts fair, a jousting tournament, people-powered rides, and a feast – all rolled into a nonstop, day-long family adventure!

And, Watch The Jousting

Two tons of horse, knight and armor gallop onto the field prepared to do battle with ten-foot lances for a lady's honor. And when the joust is done, you can visit the "The Royal Stables" and meet your champion from the era of chivalry. Jousting is held three times daily in the King's Tournament Arena.