"The ethanol industry doesn't want you to see these photos."

"The ethanol industry doesn't want you to see these photos."

Protecting Boaters at the Gas Pump is a new website with a series of photos of gas station pumps in Illinois, Indiana and Wisconsin that clearly shows the challenges boaters face with poor ethanol warning labels at the pump, resulting in a greater risk of misfueling.

The effort is from the National Marine Manufacturers Association's (NMMA), which was recently shared in "Boating United" campaign that urges recreational boat owners to tweet their members of Congress to stop the expansion of the government-mandated fuel. Boat Owners Association of The United States (BoatUS) supports the effort and is urging recreational boaters to share the website with friends: https://spark.adobe.com/page/dYPx7SjouAr2k/

"The ethanol industry doesn't want you to see these photos of gas pumps," said BoatUS Manager of Government Affairs David Kennedy. "The confusion presented to consumers at the pump today is real. Putting the wrong fuel in your boat will likely void your engine's warranty. We applaud NMMA for clearly showing the misfueling problem." 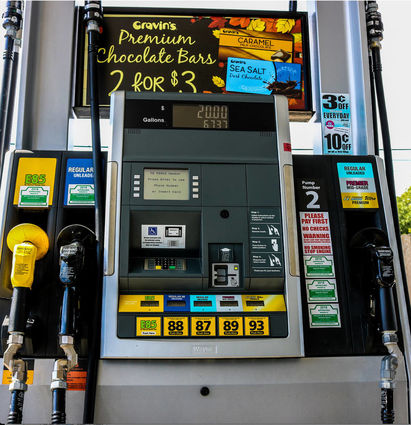 LOOK CLOSELY -- Can you find the E15 warning label? This pump is located near Cedar Lake, Ind.

E15 is currently banned for sale in many states by the Environmental Protection Agency during summer months over concerns that it contributes to smog on hot days. The push for more ethanol into the nation's fuel supply is a result of the Renewable Fuel Standard (RFS). When it was passed in 2005, RFS assumed that America's use of gasoline would continue to grow. Since then, however, gasoline usage has not increased as forecast, which today forces more ethanol into each gallon of gas.

BoatUS has long had concerns over potential consumer misfueling with E15. Most recreational boaters refuel their vessels at roadside gas stations where pump-labeling requirements are minimal with just a small E15 orange warning label. The advocacy, services and safety group for recreational boaters is a member of Smarter Fuel Future, a coalition that aims to reform the RFS.