At press time, Lake Powell was continuing to drop about one foot per week. The Castle Rock Cut should be passable for another two months. It was recently announced that a High Flow Experiment (HFE) will occur during the first week of November.

At that time, the outflow from the dam will increase dramatically to move sediment from the river bottom to the river banks further DOWNSTREAM. This event improves habitat for native fish in the river and in backwaters. It is likely that the Castle Rock Cut will no longer be open after the HFE event occurs.

The big news now is that striper schools are actively chasing Shad schools in deep, open water. That means it is time to pull out the jigging spoons and start fishing in deep water in the canyons and main channel. If you are lucky, it is still possible to see a quick striper boil. You may be able to get to the school quickly and catch some fish on top water lures.

More importantly, a surface-feeding event marks the spot where large schools of Stripers are holding in deeper water. Get to the boil site as quickly as possible and if the fish have gone down, deploy spoons into the depths, let the spoon hit bottom and then speed reel the spoon back to the boat.

When the lure hits bottom, start reeling the spoon as fast as physically possible. If fish are seen on the graph at a certain depth, pause and jig a few times at the suspected holding depth. Then continue reeling very fast until you are sure that the spoon is above the holding depth of the school. Retrieve the spoon, cast again, then repeat the retrieval process.

If no boils are seen, use the graph to search for a large striper school, which may be holding somewhere between 30 and 90 feet of water. When a striper school is detected, stop quickly and drop spoons immediately. Let the spoon hit bottom to help you know where the spoon is in relation to the fish.

If the school is 10 feet off the bottom, then reel up four turns and start jigging the spoon up 3 feet and letting it fall back down 3 feet. Stripers often follow the spoon and then hit as it falls. It is more likely to feel the fish as you jig upwards instead of feeling the fish hit the lure as it falls.

A hooked striper excites the other fish in the school as they see the fish swimming with a "Shad" in its mouth. The school follows the hooked fish looking for more food. It is often possible to "lead" a striper school that follows the boat.

When a fish is caught, unhook the fish as quickly as possible, and return the spoon to the water immediately to keep the school under the boat and actively engaged in searching for more Shad. It is not unusual to lead a striper school for over an hour as the boat drifts with the breeze, while catching 50 or more Stripers in one drift. 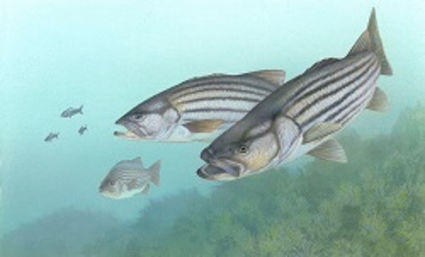 Smallmouth bass fishing continues to be excellent lake wide. Dropshot rigged Yamamoto Shad-shaped worms and other plastic baits are working well all day along the shoreline. Look for long rocky points that reach out into the lake at the new lower water levels we are now dealing with. Bass will be holding at 10-20 feet at the end of the point and also at the same depth perpendicular to the point.

You Can Still Catch Other Species

Most fish are perking back up now that the water temperature is dropping into the mid 70s in the morning. Expect to still catch a few Largemouth Bass, bluegill, walleye and catfish while fishing for your favorite species of fish.