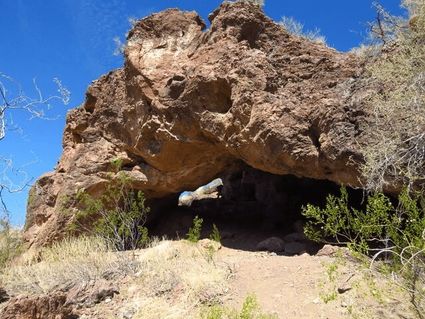 One of the things I like most is simply to drive around off the highway and explore. My dad and I used to do that a lot when I was younger – we'd scout for deer and we'd take every road we found.

Sure, a lot of times we had to turn around because the road was too rough – after all, we were driving a '62 Chevy pickup with a Power Glide transmission. That means it had just two gears, low and high. Weird, right? But we took that thing all over the place, especially in Hunt Unit 21. Dugas Road was a favorite, and there are tons of roads that lead off from that road. I don't know if I've ever been on all of them, even today.

Back Then, Paper Maps

Back then, dad and I relied on paper maps. There were no cell phones, no apps, no GPS units (for the average guy anyway), just paper maps. For dirt roads, forest-service maps were awesome, and still are, but for the most detail,you need a USGS quadrant map, and those can get really expensive since each 1:24,000 map only covers 49 to 64 square miles, depending on your latitude. I have a huge box full of them, but it always seems that no matter where I go, I'm always just off whatever map I'm looking at.

Then too, if you're not really sure where you are at the moment, a paper map isn't much help. I do know how to triangulate my position using a compass and a map, but that is time consuming and you need to have at least two landmarks in sight that you can positively identify.

I've tried a lot of map apps, including various hiking maps and hunting maps. I do like the Trails.com maps very much, but in order to use them when you don't have internet access, you have to purchase a premium membership. Then you can download the trail maps and use them offline.

It's not that much per year, and it is really helpful because you can see exactly where you are on the trail so you know what's ahead and how far you still have to go. AllTrails is popular too, but for some reason, I have a hard time using that one.

Map downloads are free once you have purchased the app. I've been running it on my iPhone (it only runs on iOS) for several years now and I absolutely love it. In fact, I love it so much that I bought an iPad for the sole purpose of downloading this app for off-roading. A phone is great, but an iPad, with its bigger screen, lets me see a lot more of the map at a glance.

Here's how I use the app. When I first bought the app, I spent quite a bit of time downloading every map in Arizona onto my phone. Since my phone has enormous storage, I downloaded them all in high resolution. You can also choose low resolution if space is an issue, and simply change the quadrant to full as you need it.

When I got the iPad, I had to re-download them all again. You can do up to 40 maps at a time, but it still takes a while. Fortunately, if you have created waypoints or dropped pins, they all transfer when you re-download the apps if you switch phones.

Yes, you have to download all the maps again if you get a new phone, and I was terrified I'd lose all my pins, but I didn't. Hooray!

All You Have To Do

All you have to do to use the app is open it up and press the little circle with the four tick marks that you'll find in the bottom left corner of the screen. If you don't see a little menu down there, touch the triangle – that makes the menu appear and disappear. When you touch that circle, a map will open and a blue dot will appear in the exact center of the screen. That's you!

At the very top you can see your exact coordinates and your elevation. If you're near the edge of a map and want to see what is on the next map, just touch and drag the current map and an arrow will appear on the blank spot. Touch it and that next map will appear.

Can Am Defender And Mochi

Since John and I bought the quad, we've had some awesome times just driving around the desert close to home. As you may know, we recently lost our old French Brittany, Rosie, but you might not know we bought a new French Brittany, Mochi, from Keller French Brittanys in Mayer. Rosie was too old (almost 17) to go off-roading with us, but Mochi is now going to be our adventuring buddy.

We needed an ROV that she could ride in with us, so we upgraded to a Can Am Defender – it has a seat and seat belt between us so we can belt Mochi in and take her with us. I'll be sure to post pics of her in her seatbelt as soon as she's old enough to go out.

As soon as we get off the highway I open up the app and start looking around at what's near us. When we come to a side road, John will often stop and let me drag the map around to see if there is anything interesting on that road. We were out Castle Hot Springs Road near Morristown, west of the highway one day following a big loop ride we found in an off-road guide when I spotted a dot on the map with the words "natural arch" on it.

I really wanted to see that, but I didn't see a road to it, so we just used the app to take roads that were leading toward it. We ended up turning off the dirt road (9052) into a wash. We actually passed the arch twice before finally finding it – it was hard to spot behind the palo verde trees and brush.

This arch is a cute little arch that looks like someone built it on purpose out of rocks, but it's a natural arch. We were super excited to find it and took plenty of photos. I dropped a pin on my app. Since you have a choice of icons, of course I chose an arch.

We saw a lot of other fun stuff on that ride – remains of an old stone cabin, remains of a big mining operation, old mines, a water cache – all kinds of stuff. We spent the whole day driving around, and it was great because it was cloudy and didn't start to sprinkle until we were almost back to the truck. By the way, I always drop a pin where we park the truck, and of course I use a Jeep icon for that. I also like to drop pins at roads that are marked, and I use the road number for the name. 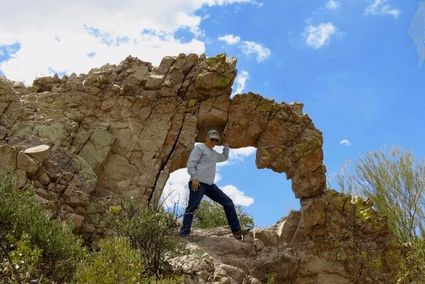 This is the first arch, the one that is down a wash.

After we got back to the truck, I realized that there was another natural arch not very far from the first one we saw. I was so bummed that it was too late to go look for that one, too, and it was several weeks later that we got the chance to go in search of it. We did find it, and although it, too, is technically an arch, it actually is a lot more like a big cave with two entrances, one on each side of a hill.

This one had a road (steep, rough, lots of loose rock) going up to it, with a short walk from the road to the entrance. Inside was dark and cool, but when I went way in the back so I could get a photo of both entrances, I heard the unmistakable sound of a lot of bees busy doing what bees do. So I got the heck out of Dodge.

But it was so cool to have spotted those arches on the map, then navigated to both of them. Such cool stuff, and right in our own backyard, so to speak.

This app has helped us find so many interesting places you wouldn't believe it – it's the best eight bucks I ever spent, and I highly recommend it.