Each Has Its Positives And Negatives 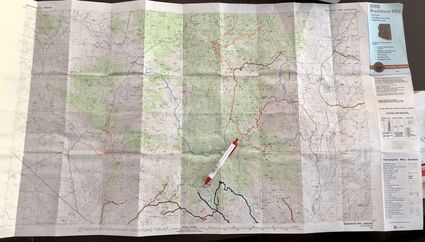 Here is a 1:100,000 scale map of the Bradshaw Mountains, with a pen pointing to Copperopolis. You have a much bigger area to see, so you can get a better feel for where you are.

I grew up in a world without personal computers or cell phones, and since I also grew up hunting, I know how to use and read a paper map. In fact, with a topo-quadrant map and a compass, I can pinpoint my location quickly and easily. I love paper maps and I have a lot of them, but I also use GPS extensively. In fact, I use both because paper maps and GPS or electronic maps both have their strengths and weaknesses. For me, GPS will never replace a paper map.

I have an entire set of topo quadrant maps on my iPhone and they work even when I'm offline. I also have some map apps that don't work when I'm offline, which is a pain. Don't get that kind. When I bought the map app it was only around eight bucks, but I had to download every single map and that took a long time – you can only select a certain number of them at a time.

Then, when I bought a new phone, all my maps were gone! However, when I reloaded them, at least all my pins were still there. What I like about the electronic map is that I can see my current position as a little dot moving on the map. However, the portion of the map that is in view is so small – as small as a phone screen. A paper map gives you a much bigger picture, so you can see farther down the road so to speak.

Speaking of dropping pins, one of my favorite paper maps is the one in my office. It's a map of the state of Arizona and it is covered with pins. It shows where we have had adventures with our granddaughters. It's a big deal to all of us to put new pins in the map. Now that they are growing up and having adventures with their friends, I bought each of them their own map, along with some 1/8-inch dots to use instead of pins. I started them both out by putting dots everywhere that has a pin on my map. You can get the maps and dots at Wide World of Maps.

If you look at a paper map or even an atlas, it will have a date. I have some forest maps that are so old that they still show Highway 666 between Safford and Springerville! So, one advantage that a GPS map has is that it may potentially have more recent information on it. But that is only if updates are available.

When I am using my topo maps on my phone, I often find that we are passing roads that are not on the electronic map. I also find roads that are on the map but no longer exist in real life. I use maps extensively when we are out on the UTV or on back roads in the truck, and I always make sure I have paper maps. The GPS is sort of a backup.

Paper Maps Do Not Run Out Of Batteries

A paper map may get out of date, but it will never run out of batteries. It works even if it is cloudy and even if I have no cellular service at the moment. Since we spend so much time hunting and exploring, I like to have a variety of maps. I buy travel and recreation maps so I can see all the camping and boat launching areas, as well as attractions and monuments, especially when planning a trip with the grandkids.

For adventuring with my husband, I like the various 1:100,000 scale maps that Wide World of Maps carries. These give you a lot more detail than a state map can, but they cover a much larger area than those individual quadrant maps do. They have enough detail to show jeep trails, windmills, water holes, etc. I have quite a collection of them.

On a paper map, you can use highlighters to show the roads you have taken, and you can make notes and look for roads that you'd like to take in the future. If you are just out exploring, a paper map will show you what is down a road that you are passing, and tell you the name of that mountain off in the distance. I still use the electronic map everywhere we go, but I have to leave my phone plugged in all the time because it really sucks the battery dry. A paper map never does that.

Why So Many Maps?

I have a set of four maps that cover Arizona – NE, NW, SE, SW. These are excellent when we are planning a long trip with the girls. They give a little more detail than a map of the whole state, and it's easy to choose a route that is easily doable and still leave us plenty of time to explore anything interesting we see along the way.

One reason why I have so many paper maps is that with a paper map you have to choose between area and detail. One way to get both is to buy one of those "Arizona Atlas & Gazetteers" by Delorme at Wide World of Maps. They cover the entire state in pretty good detail.

The drawback is that it seems as if I am always on the edge of a page! On the back, it shows the state with lines dividing it up and page numbers so you can find yourself quickly. Those atlases are awesome – they show contour lines and quite a bit of detail, and they are compact and never need to be folded, plus they are a steal at $18.95. 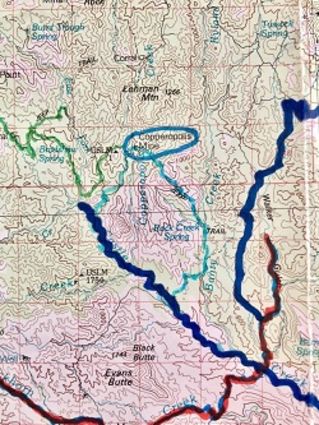 Here is a 1:100,000 scale map of the Bradshaw Mountains, with a pen pointing to Copperopolis. You have a much bigger area to see, so you can get a better feel for where you are.

Most of my fishermen friends use a GPS map on their boat. They are amazing, but it sometimes seems as if you spend more time trying to figure out how to find the information you need than you spend fishing. GPS and electronic maps can be complicated, and if you've ever accidentally wiped out your whole route by touching one thing by accident, you will know what I mean. Sometimes I can't even figure out which way is north on those things! But I surely do love being able to see where I am without whipping out the old compass and making lines.

Paper Maps Can Never Be Replaced

A GPS can let you down. Once when John was still working, he asked me how to get to a certain place, so I entered the address on my map app and told him what it said. Turns out it was sending him down a road that doesn't exist, and it took him forever to get where he wanted to be. Another time, my map app had me going the wrong way down a one-way street. Those map apps have their place, but as far as I'm concerned they will never replace paper maps.