It's all about the message - 'Clean, Drain and Dry'. 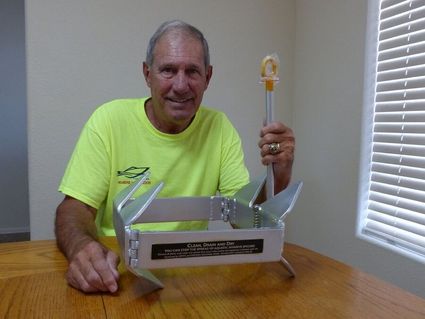 The effort to prevent the spread of quagga mussels throughout fresh water lakes and rivers in the western United States has been ongoing since 2007 when the harmful mollusks were initially discovered in Lake Mead and specific portions of the Colorado River including Lake Havasu.

Although numerous containment strategies have been employed by various local, state and federal agencies during the past ten years, quaggas have proven to be a stubborn and virtually unstoppable adversary, infecting a growing number of lakes and rivers across western states.

Now, private industry has joined the fight and taken up the challenge. Slide Anchor, manufacturer of their patented and popular "box anchor", has committed itself to the aquatic invasive species fight. Dvorak coined the original term 'box anchor' more than two decades ago to describe the unique rectangular configuration of his anchor which makes it different and more effective than conventional-shaped anchors.

"As a Lake Havasu City-based business focused on the BOATING industry, I've been aware of the growing problem presented by the spread of quagga mussels," remarked Ryan Dvorak, founder and president of Slide Anchor. "Because they multiply so quickly once introduced into a water body, quagga mussels soon dominate an ecosystem, causing potential havoc for all living organisms.

"And just as critical is the costly damage that quagga mussels do to vital infrastructure like water treatment plants, dams, aqueducts, marinas and irrigation systems by clogging intakes and drains."

It wasn't until early spring of 2017 that anchors became a central issue in preventing quagga mussels from unknowingly being transported by trailer boaters to other fresh water bodies via anchor contamination. In data prepared by the California Department of Fish and Wildlife, it was learned that an overwhelming percentage of quagga mussel intercepts discovered at California Border Protection Stations cited anchors as the source of contamination during routine inspections.

The Lake Havasu Marine Association - which has been involved in educating over 31,000 recreational boaters about aquatic invasive species prevention methods since 2013 with a grant from U.S. Fish and Wildlife - immediately saw the need for additional emphasis of the importance of cleaning boat anchors with their successful 'Sticker A Mussel' campaign.

Lake Havasu Marine Association president and CEO, Jim Salscheider, contacted Dvorak to see what could be done to help mitigate the problem. Within in matter of days an action plan was devised, and was included in the Marine Association's annual grant proposal to U.S. Fish and Wildlife for an additional $12,000 to fund the program.

The extra funding was used to help defray some of the cost in manufacturing and attaching a prominently displayed engraved metal label affixed to the 'box anchor' reminding boaters to 'clean, drain and dry' after every use.

"Although it sounds like a relatively simple task to attach a metal label to a box anchor," commented Dvorak, "it wasn't. We needed to investigate what was the optimum material to use, how to protect it from corrosion and the best way to permanently attach it."

Once the federal grant was approved, the process moved quickly. The overseas manufacturer of the 'box anchor' prepared several prototypes which were reviewed by Slide Anchor and various governmental agencies for appropriate messaging. Meanwhile, the Lake Havasu Marine Association created a new local-awareness educational campaign built around anchors.

"We designed, produced and installed over twenty new billboards at strategic locations along the lower Colorado River from Parker, AZ to Needles, CA in less than eight weeks," said Salscheider. "Our goal was to shine a light on anchor awareness and education, featuring "Popeye" as our messaging vehicle. The campaign worked. During this past summer and early fall, quagga mussel contaminated anchor related intercepts at the California border stations reduced dramatically."

On December 4, 2017, the first shipment of 'labeled' box anchors were delivered to the Slide Anchor headquarters in Lake Havasu City. "We had our first 1,200 box anchor units ready to ship to our many BOATING retail outlets before the new year," said Dvorak. "I anticipate about another 7,000 units to arrive ... so we'll be able to fill the retail pipeline for new labeled box anchor purchases when the spring boating season begins.

"I'm confident that this investment in quagga mussel education will contribute to better BOATING for everyone in the future. If a little label like this is an effective reminder to boaters to do the right thing, I hope other companies will join the 'clean, drain and dry' movement and help keep our waterways free of aquatic invasive species."